Considering the multitude of problems with the Morrison government's proposed Religious Discrimination Bill (RDB), the outlook for 2020 may appear bleak to many Australians who value rationalism, equality and the separation of church and state. But I have great hope for the new year.

Right across the country, there is a rising desire for secularism and reason to replace the conservative, pro-religious agenda that characterises our current politics – as exemplified in the many ways that the RDB is attempting to privilege religious belief over practically every other aspect of our society.

If you follow the National Secular Lobby, you'll know that we have no desire to remove religion from society. Nor do we seek to limit any person's freedom of belief. In fact, one ideal of secularism is that all beliefs are treated equally under law, and that no belief is privileged or persecuted.

But what we've been witnessing under Scott Morrison is a creeping theocracy, where religion is gradually given greater and greater legal privilege in the name of "religious freedom".

While it is certainly important to have reasonable "freedom of religion", it is also important that we have "freedom FROM religion". No person should be forced to have their lives unduly governed by religious beliefs to which they themselves do not subscribe.

Even if you believe that religion should have greater freedoms, you should understand that these "freedoms" aren't free: they come at a cost to someone. You cannot give religion more freedom to act – to "positively discriminate", for example – without taking away freedoms from others. Religions must have the ability to function, but their functioning should not disadvantage the rest of society.

If the RDB is passed into law, we will be at a point where there is no longer any such thing as freedom from religion, as so many areas of society will be affected by it in ways that privilege faith-based institutions and religious individuals.

As many religious groups push for the government to grant them expansive new privileges in our nation's laws, Australians everywhere are realising that the proposed RDB is, at its core, fundamentally un-Australian.

While the media's reporting focuses largely on the narrative that it will be the LGBTIQ community that will be affected, high-profile equality campaigner Rodney Croome reminded us in one of our recent 'BBQ Stopper' posts that so many more Australians will suffer. The proposed laws will negatively affect ALL OF US – even people of faith in some ways – and turn large swathes of our society into second-class citizens in terms of their access to employment and services.

Australians everywhere are realising that it is not "disrespectful" to resist religious privilege – and, indeed, that it is imperative we do so. We must stand up for secularism and confront this creeping theocracy that threatens the cohesiveness of our society.

In recent weeks, we've witnessed many online petitions gaining the support of tens of thousands of Aussies in defense of secular values on a number of issues. And we applaud the secular champions who are taking a stand.

We know that the overwhelming majority of Australians support secularism. Secular people come from all walks of life. We have different political views. We are guided by different faiths or non-religious philosophies. In 2020, we must unite to defend the one thing we do agree on – the need to separate personal religious belief from the business of government.

The fact is that secularism safeguards freedom of religion and belief for all, and protects all of us from the pernicious effects of religious privilege. Whether you are religious or not, secularism will protect your rights to personal belief and to freedom from discrimination. The RDB, on the other hand, will enshrine the right for people to discriminate against you into law.

With secular-minded Australians now taking a stand against undue religious privilege, there is indeed cause for hope.

Help give us a bigger voice for secularism in 2020. 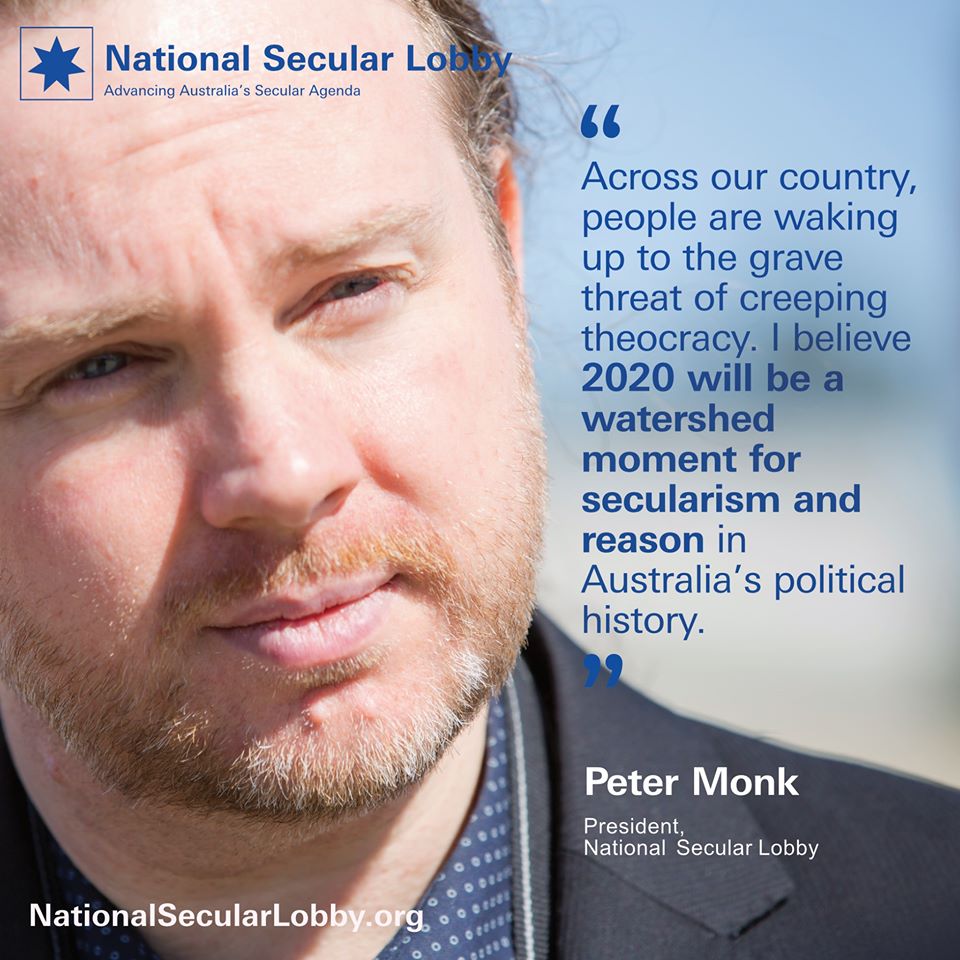