Wondering where the parties stand on some of the key issues we have been highlighting in our ‘Stand up for Secularism’ campaign? We hope this guide will help to inform your voting.

Here is our party scorecard. Use this as a quick reference and learn more about each point in our analysis below. When referring to this scorecard, please keep in mind that it's quite possible for a party that is "secular friendly" on an issue to give their preferences to a party that isn't, so make sure you check the "How to vote" cards to see where your party/candidate preferences are going! 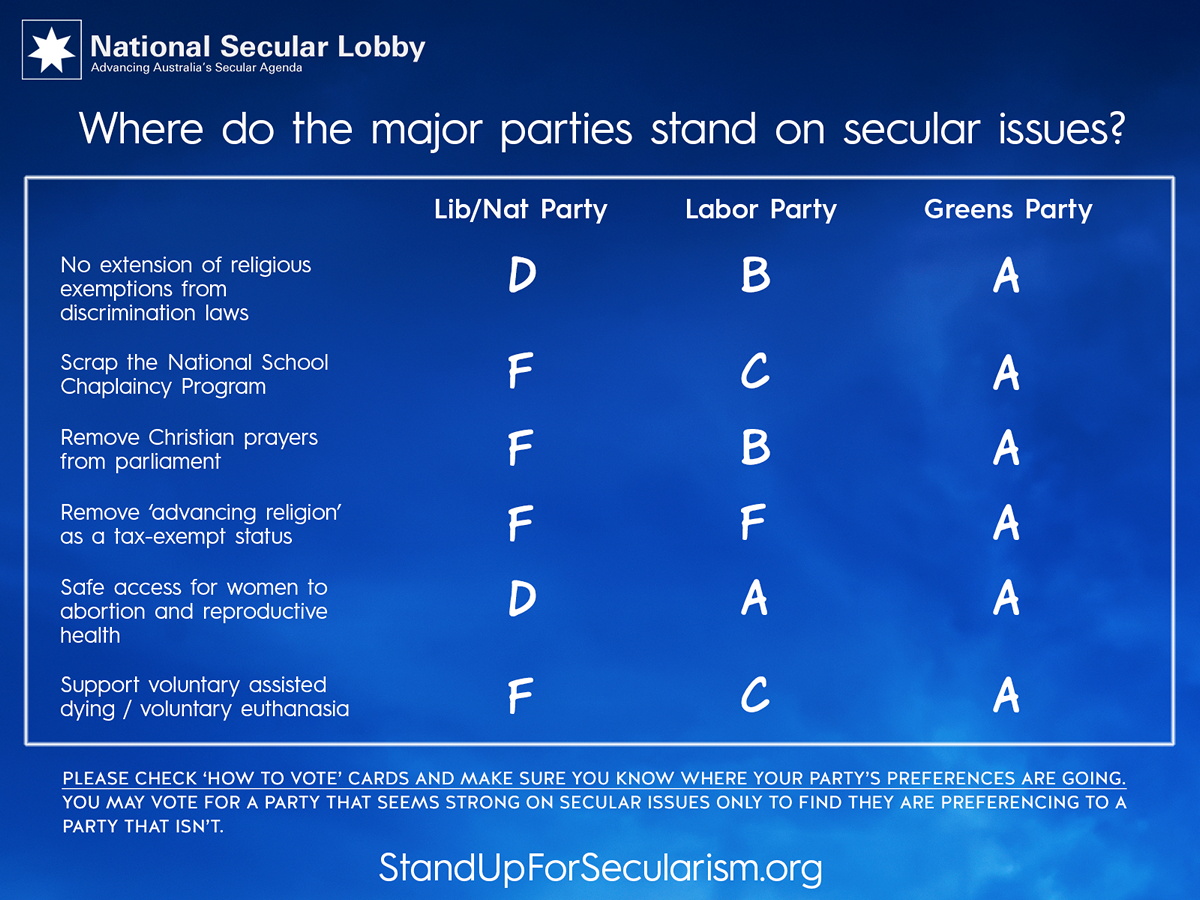 No extension of religious exemptions from discrimination laws

They have gone as far as saying they will support amendments to the Sex Discrimination Act to ensure that no student can be expelled by a school on the basis of their sexuality. They are, however, also balancing this with a commitment to defend the right of religious schools to operate according to the tenets of their belief.

The party has committed to removing the exemptions from the Sex Discrimination Act that permit religious schools to discriminate against students and staff on the basis of their sexuality or gender identity. However, it has not made clear whether other people – non-LGBTIQ people – would gain similar protections.

The Greens support the removal of religious exemptions from anti-discrimination laws. The Greens believe that “all people — regardless of culture, ethnicity, religion, language, place of birth or citizenship status — should have equal rights and the right to participate equally in social, economic and cultural life, and that cultural, religious, gender and other differences often give rise to specific needs and circumstances that must be taken into account in order to ensure equal rights for all.”

They have committed to extend the National School Chaplaincy program through to 2022.

Labor has stated that it will re-open the program to secular chaplains. But in terms of scrapping it altogether and saving taxpayers in the order of $65 million each year, Labor has made no such commitment. It has held a bi-partisan position. Although, at a state/territory level, Labor governments are starting to shift.

They have committed to redirecting funding to support qualified, secular school welfare and family support professionals in schools.

The Lord’s Prayer isn’t going anywhere as long as they’re in charge.

The party doesn’t seem to have a clear position on this. It has voted at times in the past, at state and federal levels, to do away with it. Some of its members would want it to remain. Some would support a more multi-faith option.

The Greens have been the main force for change on this issue for many years in the national parliament and were behind last year’s push in the Senate to remove prayers.

Another issue where these parties will maintain the status quo.

They do not support the removal of the tax-exempt status.

Yes, they will end the rort! They want to remove tax exemptions for religious organisations that are not enjoyed by other charities and not-for-profit organisations.

Safe access for women to abortion and reproductive health

The Coalition has no plans to change existing laws.

They are committed to support all women in accessing termination services in public hospitals. They also support the decriminalisation of abortion in the states where it remains illegal.

They would seek to improve access to abortions in public hospitals around the country. They also support the decriminalisation of abortion in the states where it remains illegal.

The Coalition position is generally against voluntary assisted dying. Scott Morrison said in 2015 that he would never support voluntary euthanasia.

Labor does not seem to have a clear, unified position, instead stating that party members are entitled to vote on matters relating to this issue in accordance with their conscience. Bill Shorten has cautiously voiced support for euthanasia with appropriate safeguards.

The Greens are in favour of voluntary assisted dying and believe Australia should legalise access to physician-assisted euthanasia. They also want to restore the right of Territories to legislate on the issue.

Responses to our ‘Secular Views Survey’

During our campaign, we sent a survey to each party to ascertain their views on many key areas. We only received a response from the Labor Party.

‘Promotion of Religion’ is an activity that should not qualify for tax exempt status.

Labor does not support the removal of tax-exempt status for religious organisations.

Private schools that do not adhere to the National Curriculum, or that promote anti-science, homophobic or misogynistic ideologies, should not qualify for government funding.

Unfortunately, the Morrison Government and Centre Alliance did a deal to block passage of this bill, despite having promised – and failed – to take action themselves.

Given Scott Morrison has failed to deliver on his promise to remove exemptions that allow for discrimination to occur against students and teachers in schools, if elected, a Shorten Labor Government will consult with stakeholders on the best way forward to address this issue and then legislate to make our commitment law.

Government policy should be based on independent professional expertise, and be free from influence based on religious conviction.

Labor believes a professional bureaucracy is crucial to good government. Labor will refocus the Australian Public Service on what’s most important – quality services for Australians, sound advice to elected representatives, and investing taxpayers’ money in a careful and considered way.

No law should restrict a woman’s sovereignty over her own fertility and reproductive functions.

As part of the strategy, Labor will work with states and territories to progress decriminalisation of abortion across Australia.

Under Labor’s national platform, members of parliament are entitled to vote on matters relating to termination services in accordance with their conscience.

People with a debilitating condition should have access to medical assistance to end their life.

Labor believes people must have dignity and choice at the end of life. This requires a health policy discussion to determine whether current end of life care practice reflects the community’s preferences not only in terms of where they wish to die, but when to die. Labor recognises that some states have legislated in this regard. We also recognise that current Commonwealth legislation acts as an impediment for the territories to legislate in respect to these issues.

Under Labor’s national platform, members of parliament are entitled to vote on matters relating to voluntary assisted dying in accordance with their conscience.

Climate change is caused by human activity, and is a severe threat to the global ecosystem.