One constellation requires compassion and a deep and insightful understanding of what is meant by 'intolerable suffering', which comes after a diagnosis of a terminal/incurable disease (and a very long time before the "end stage" comes), together with a plea for a peaceful and quicker exit from life when death is non-negotiable – versus the inhumane and merciless constellation comprising the views of "by-standers" who seek to impose and dictate their right wing/faith-based views on those who do not share those views.

It was comforting on Friday to hear David Muir (Clem Jones Group) remind the Committee to focus on the subjects of this legislation – the terminally ill – for one might have forgotten where their voices/views were during the week.

It appeared that years of the same harrowing evidence and religious/political arguments before the Victorian, Western Australian Inquiries, and the lead up to, and during, the passing of legislation in Tasmania and South Australia, had been overlooked.

It appeared that the evidence and recommendations from Queensland's own End of Life Choices Inquiry (spanning 18 months) had also been overlooked, together with the 5,000 submissions presented to that Inquiry.

The dialogue focused on every possible and imaginable scenario that should prevent the introduction of VAD and thereby remove that last bit of peace of mind that could come to those actually living out the nightmare of a terminal illness.

Never has any legislation been so scrutinized for what is a "non-negotiable" and "done deal", i.e. the terminal patient IS going to die, so can we move on and focus on how we can make that process easier for that individual.

As one witness asked of opposers, "What is in it for them?" (a very good question to those with a financial vested interest in healthcare). I ask the same question: "What could those who oppose possibly hope to achieve by dragging someone ELSE'S suffering out, for a few more months of pain, agony and the absence of any quality of life? Why would you want to do that to a person, when they’re telling you they have had enough of the disease that is killing them?"

We heard concern expressed about whether someone's mental capacity might be impaired, if seeking VAD, due to the chemicals in their body making them "vulnerable".  Holy hell, those chemicals are pumped in right from the get-go. A shame "more info" wasn’t requested about what those chemicals do to an individual's body way physically – way before the end.

A better understanding would come from having had a Public Hearing day devoted wholly to those for whom the legislation is meant – the terminally ill; those who are dying. They are the ones who will share with you their real life experiences – the nitty gritty that is their day, their week, their month, their year/s - not the ones who "think" they know.

It’s time to make this debate about the dying person. It's time the debate stopped being influenced by politics and religion. It's time politicians re-focused and thought about those of us for whom this legislation would lessen the duration of our extreme suffering.

Visit the Queensland Parliament web page on the Inquiry into the Voluntary Assisted Dying Bill 2021.

The NSL is part of the #QLD4VAD Alliance. 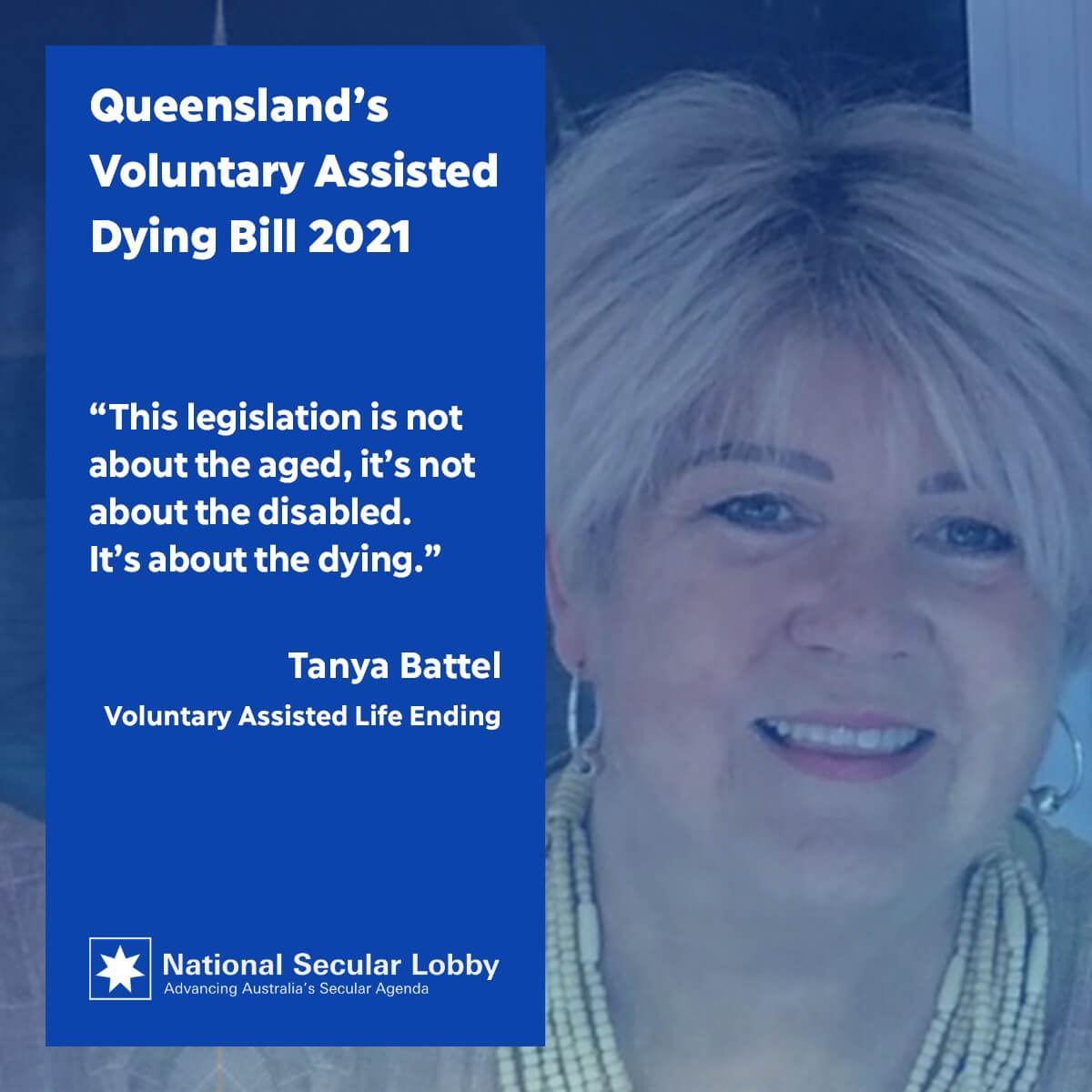