Today, we welcome contributions from four veterans who share their thoughts on the privileged role that religion plays in the Australian Defence Force and in commemoration services such as Anzac Day.

They’re calling for changes in the culture of the ADF, where institutionalised Christianity remains dominant even though, according to the 2015 Defence Census, the majority of ADF personnel are not religious.

We, too, support their plea to make the military secular. Indeed, we note that Colonel Phillip Hoglin of the Australian Army argued in 2016 that the “overtly Christian” organisation needs to adjust to the demographic changes taking place among its ranks and in society so the ADF can be more inclusive of people of no religion and of minority faiths.

Doug Steley was a photographer in RAAF for seven years. He entered the armed services as a Christian but left an atheist.

“The pretense and overt display of Christianity in the armed forces was very strong. Although, from what I saw, the actual belief was low. We were forced to go through the motions. You had to have a religion on your dog tags. You could not choose ‘no religion’.”

“I had five direct relatives who served at Anzac Cove. One great uncle died at the battle of Lone Pine, while others survived. My father was among the family members who served in World War II. So I was probably going to join the services!”

“I became a RAAF photographer between 1974 and 1981. I had been raised as a Christian. Due to many factors, I lost my faith while serving.”

“At that time, your Commanding Officer controlled the religious content of procedures, such as the saying of prayers during parades. In that regard, some commanding officers were worse than others. But, from my experience, it seemed that most of the enlisted men were not religious at all.”

“I am now totally opposed to any political or religious involvement in Anzac commemorations. It should be a totally apolitical and secular day of remembrance for veterans and serving members of the ADF. Because of that religious and political involvement, I don’t attend any Anzac services.”

“I would prefer that the dawn ceremonies be a moment of silence – apart for the Last Post and Reveille. There should be no prayers, no leaders, no officers, no preachers, no grandstanding, no marches. If people want to lay flowers, then they could do that silently and respectfully as individuals.”

Bridget Clinch is a former infantry soldier and captain who joined the Army straight from high school. After transitioning gender whilst serving, she campaigned for the ADF to scrap its anti-trans policy. Bridget is an atheist.

“Since leaving the ADF, I’ve become a supporter of the need for a proper separation of church and state. No religious beliefs should be put on pedestals, especially in public institutions such as the ADF. Previously, I had no care for religion. I was pretty unaware of the extent to which religion was overstepping the principles of secular democracy in Australia.”

“The reason for my medical discharge in 2010 was the anxiety and depression caused by the lengthy conflict I had with the ADF over its anti-trans policy. They eventually overturned it, but I wasn’t able to keep serving. I mention that because of the link with extreme conservatism, tied to Christianity, in the institution."

“Often, the religious elements in the ADF were something you could ignore. But there were a lot of allowances made for it. At recruit training, for example, they made time on Sundays for church. I went to the first service but then chose to spend the rest of them in my room pretending to write letters home, drawing or reading. We weren’t allowed to polish boots or brass whilst some were at church."

“When I was at commemorations such as Anzac Day and hearing from WWII and Vietnam veterans, I found their stories to be very moving. They inspired me to be the best I could be. But I would cringe whenever a priest wearing crosses took the stage. I had to try to block out what I viewed as mythology."

“I would like to see psychologists and qualified mental health professionals replace religious chaplains in the ADF. I know that the stigma about seeing a psychologist has been reduced. Whilst I did encounter some truly great padres, our public resources should be funding evidence- and ethics-bound professionals who can give the counselling, guidance and support that service personnel need.” 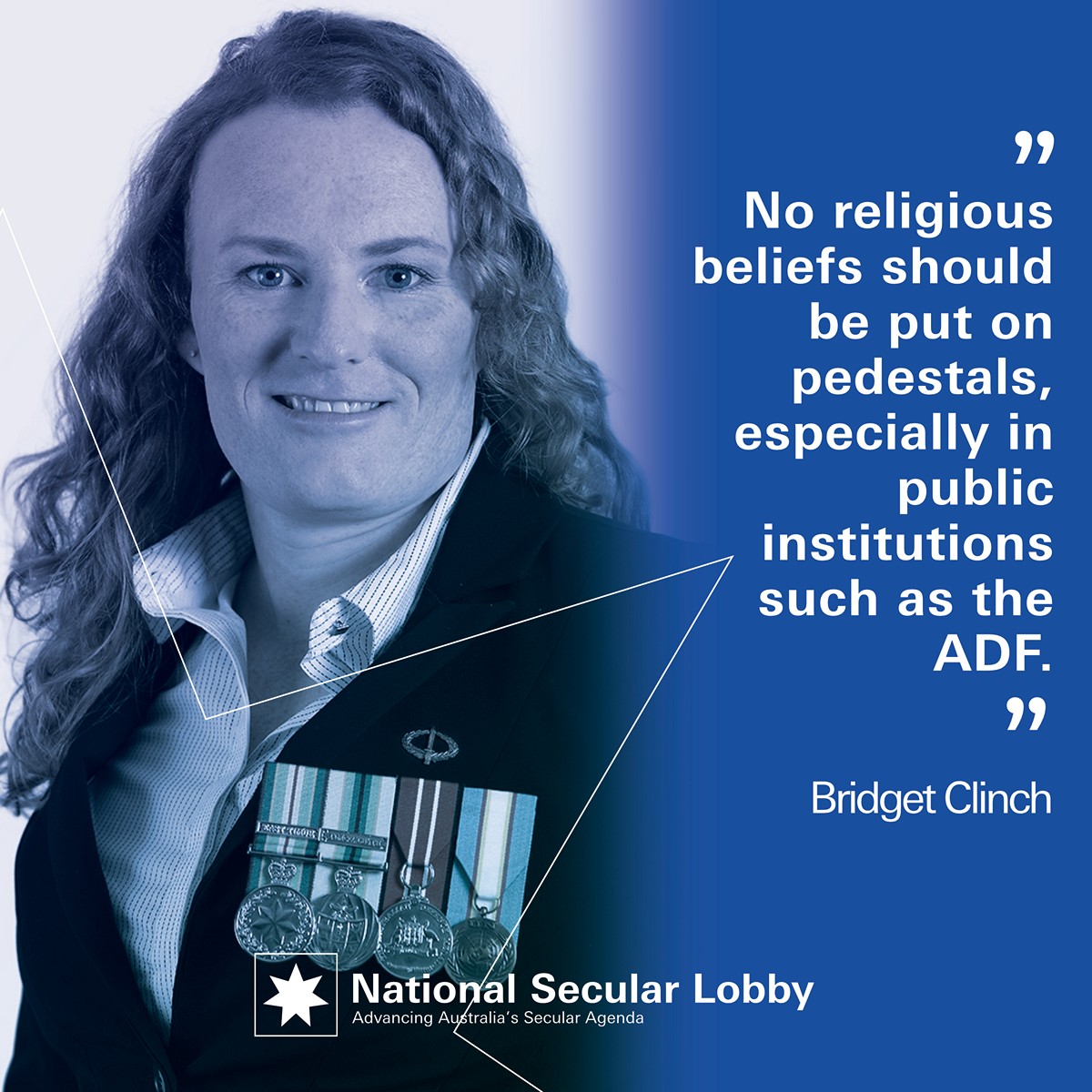 Roy Arnott OAM enlisted in the Citizens Military Force (later the Army Reserve) in 1959, retiring as a Warrant Officer Class 2 in 1996. Later, his public service career was mainly in Defence-related departments. Roy is an atheist.

“Institutionalised Christian ritual is the default condition for Army culture, traditions and ceremonial. The thrust of the Defence Force policy on religious practices is to facilitate the exercise of religious practices by those wishing so to do. This is quite a reasonable purpose with which there is no quarrel. However, freedom of religion has a corollary – freedom from religion. It is in this area where the Army’s policy is a little under-developed.”

“Special occasions provide an opportunity for members to take part in ecumenical worship on days of special significance to the ADF. On the face of it, it seems reasonable that members should be able to organise religious ceremonies they consider fitting to mark important events concerning their regiment. However, in practical terms, a religious ceremony becomes the default.”

“Commemorative events are described as occasions of national importance when it is appropriate to conduct a ceremony of remembrance. Anzac Day ceremonies are normally in the form of Christian services. Again, I find myself being ‘led’ in religious rituals in which I have a total disbelief.”

“Organised religion’s hold on Australia’s norms is waning. The culture of the ADF should reflect this.” 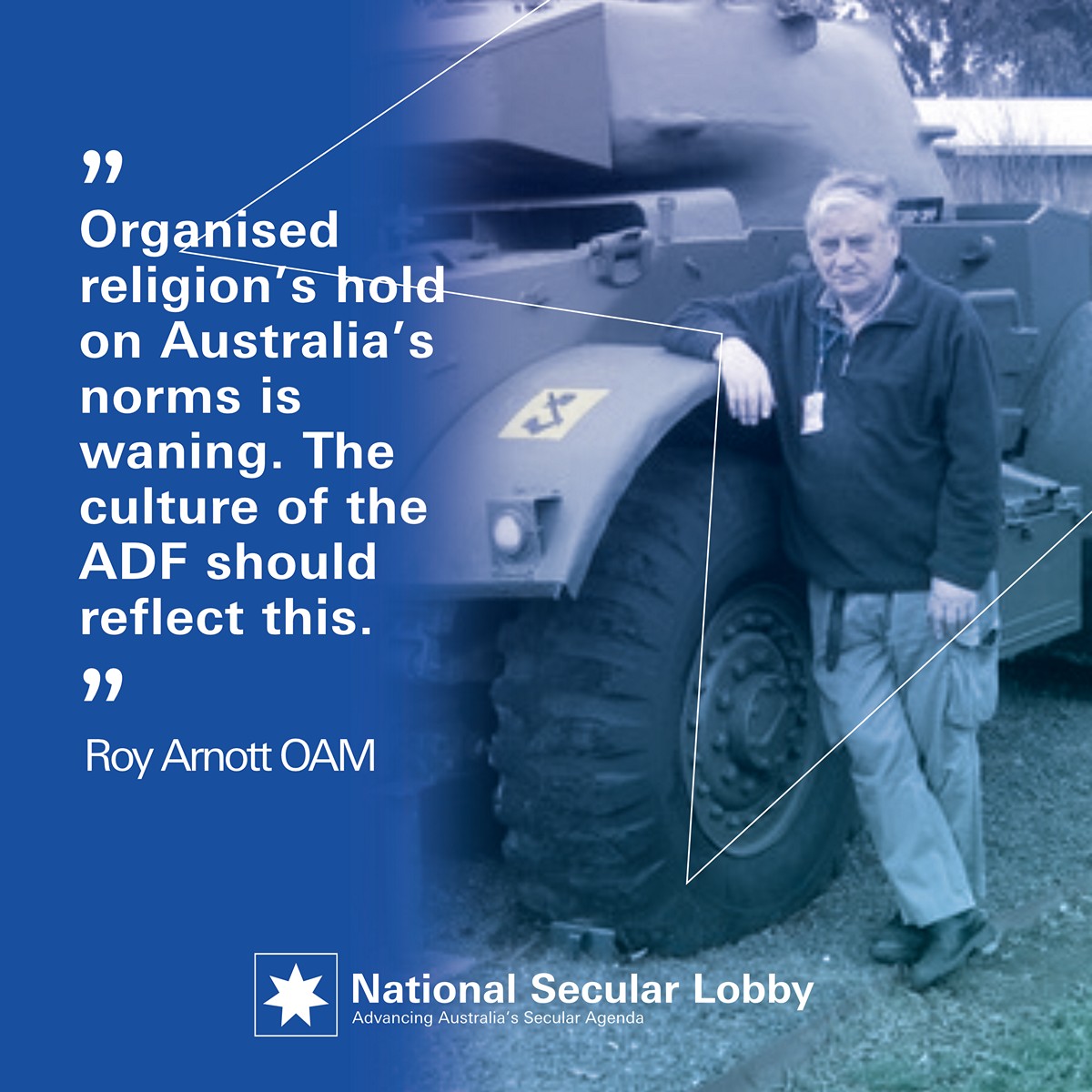 Vicki was a cook in the Army, serving on postings around Australia during a career of almost 10 years from the late 1970s. She identifies as being agnostic.

“When I joined the Army and had to give my oath, I omitted, ‘So help me, God’. But no-one seemed to notice. I was often at odds with hierarchy due to refusing to swear on the Bible for numerous purposes.

“Among my colleagues in the Army, we ignored religion. Although, there were times when we got into arguments with some people, regardless or rank.

“I certainly agree that religion shouldn’t be part of such commemorations. Our soldiers were not just of British origin. Their families came from Indigenous cultures right here at home, plus from places such as Scandinavia, France, Brazil, America, Italy, Greece, Malta, India, China. There were even Muslim Australians during both world wars. Can you imagine the uproar today if we had Islamic rituals in Anzac Day services?

“No religion should take precedence over what we fought for – freedom. The idea of holding ceremonies in which we would remember who our fallen soldiers were and what they died for, and in which we could celebrate their life and commitment to their job – that has nothing to do with religion.” 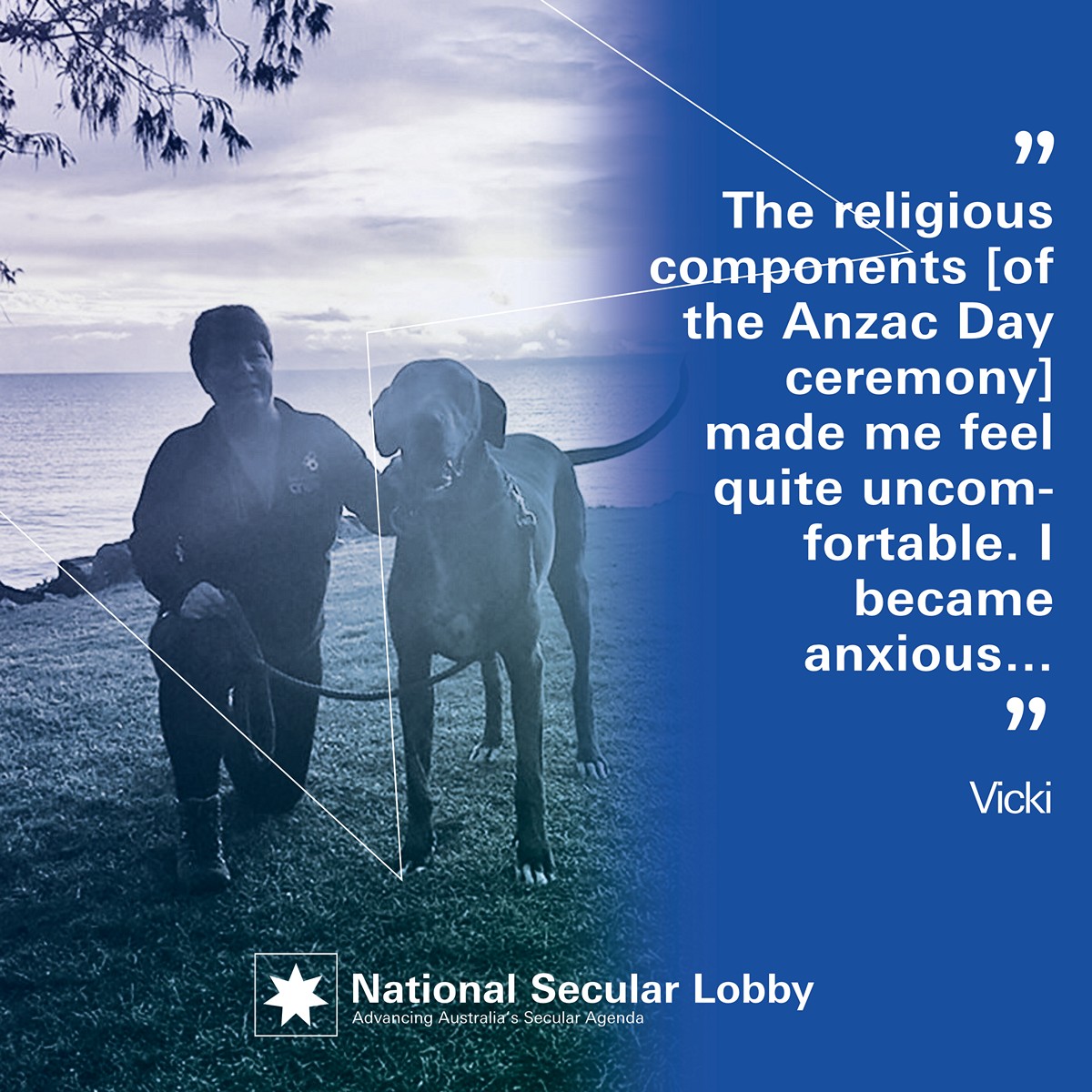