I wish to plead with all members of Parliament to support my right to have a dignified death when life is being extended with no hope of improvement.

My husband is a strict Catholic and he will die at a time of his God’s choosing, and I support his right to do so, even if this includes suffering. I want the same determination over my end.

I understand that some MP’s cannot support this Bill on the basis of their faith. But I would ask that they abstain, rather than deny me the same right as they have – that is, a death in line with their beliefs.

Attitudes to death are influenced by culture and by the times we live in. The ancient Greeks elevated the concept of a good death to a worthy goal and gifted us the term ‘euthanasia’. To die at a time of your choosing was often viewed as an individual act of honor, if to live were to bring some form of suffering.

For the countries where Christianity spread, the societal view of dying was moved from what could be a legitimate act by a responsible person, to an infringement upon the rights of  ‘God’. This view of death remained the dominant one in Australia until the 1960’s, when affluence, greater education and advances in science opened previously taboo subjects, like religion and death, to discussion and analysis. Over time, the majority of Australians have firmed in their view that a fundamental human right is access to a dignified death.

Today, Australia is a culturally and religiously diverse nation, yet many of our practices and institutions have not kept pace with reflecting this diversity.

In the 2016 Census 30.1% of Australians declared ‘no religion’, the largest single cohort. Given that many people in this category still tick their childhood religion, this figure can reasonably be assumed to be conservative. The huge majority of Australians continue to agree with our founding ‘fathers’ that keeping religion out of the business of the State is vital to a secular democracy.

Despite a changing nation, the intrusion of the beliefs of one group of people (usually Christian) over everyone else has remained strong, and advances have been hard won. Women continue to fight for control of their reproductive rights over the State. The long and arduous same sex marriage debate, and postal vote result, finally removed the right of others to dictate whom a person could love and marry.

Death now remains the last threshold of permissible interference by one group over everyone else. Somehow on the issue of death we still excuse that religion can trump reform, and conservative politicians have the right to romanticize, on behalf of us all, unfathomable pain and suffering.

This position is now clearly at odds with the overwhelmingly majority of us, of faith and of no faith, who support a compassionate end of life option for the terminally ill.

Along with our changing beliefs, have been dramatic advances in medicine. People are living longer and are much more likely than any previous generation to die from slow, debilitating and agonizing conditions resulting from illnesses associated with extended life spans. Often it is the dying process that is being medicalised and extended and not a quality life. Many of us feel that this extension of an inevitable and painful dying process is an unwelcome and protracted exercise in forced harm.

When my adult daughter was in hospital, dying, her palliative care doctor just wanted to hug me and pray with me, even though he knew we were both atheist.

To put it bluntly, if your customers have an alternative to your services, your provision had better be the best it can be.

As for the slippery slope argument, when abortion was first decriminalized in SA, some of the same people now opposed to assisted dying legislation, claimed that late term babies would be ripped from wombs by cruel doctors, that women would be lining up for abortions that assaulted their bodies and broke their hearts, or abortions would be forced upon women too stupid to make their own decisions.

The same original sin dark ages view of humanity has been hanging over this debate. No one will be forced to end their life before they are ready. We trust all those involved in this important legislation will ensure the appropriate safeguards.

Claims that the death of a terminally ill person will be hastened by grasping offspring and malicious carers is demeaning to all, and particularly the medical profession and the patients themselves. Patients get sick! They don’t get stupid. And a few bad people will always be with us, whether legislation exists or not.

Of all the positives relating to Voluntary Assisted Dying in SA, one of the most powerful is the potential to increase the quality and even the length of the person’s remaining time. When a dying person knows they can have some control over their suffering, many relax and can endure more pain. People with diseases such as Motor Neurone can feel compelled to take their life too soon, out of fear that if they wait too long, and need the help of a loved one, that loved once risks gaol. So whilst the focus of VAD discussions is usually on ending life, it can in many cases, allow a person to extend it.

For many it takes the personal experience of witnessing a loved one’s suffering to gain their support for assisted dying, as was the case with Victorian Premier Daniel Andrews, a practising Catholic. But the dying cannot wait until all politicians face this reality in person. It is now time to act with community compassion.

I urge all MP’s, whatever their personal views, to give all Australians an equal say over our final days, whether that be to put our faith in a “God". Or to say, “For me, enough now. That is enough’.

SA residents, join Cosi and Andrew Denton at the Candles for Compassion Vigil on the steps of Parliament House on 26th May to show MPs why they must pass this Voluntary Assisted Dying bill. Full details here on the Facebook event page.

You can also contact the MPs who are currently against this legislation and let them know why they should support it: 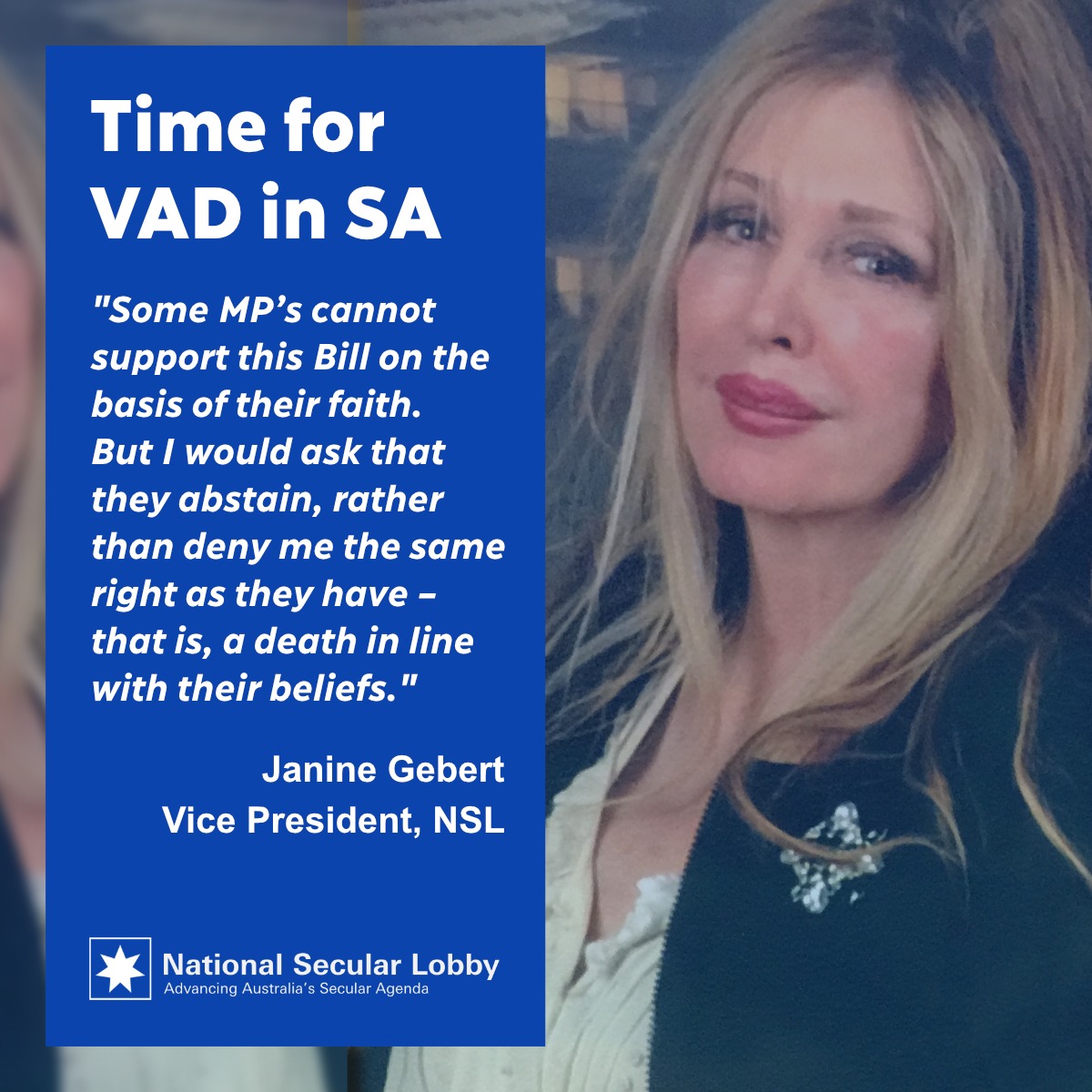