Thanks for joining us for a Q&A, Jackie. You’ve indicated your support for voluntary assisted dying (VAD) laws to be introduced sooner rather than later in Queensland. Do you think there will be some disappointment amongst Queenslanders that the issue has been put on hold until next year?

Understandably there would have been some disappointment felt amongst the community regarding the delay in progressing this important social reform. However, I think the people of Queensland understand that the Palaszczuk Labor government is committed to progressing voluntary assisted dying, given all of our action to date, on behalf of the overwhelming majority of Queenslanders.

My personal commitment to this issue is on the public record. I also know that many of my colleagues come to this issue with their own personal experiences, or have been galvanised by the stories shared at the parliamentary inquiry into end-of-life care and voluntary assisted dying. I believe momentum on this issue will continue to grow after the Law Reform Commission presents its draft laws.

You are one of several MPs wanting a bill to legalise VAD to be put to the parliament before the upcoming election. What are the realistic chances of that? What would need to happen in order for that to be realised?

I know that this is an important issue for many members of my community and communities around Queensland. The Palaszczuk Labor government has been and will continue to be a reforming government, making once-in-a-generation changes like abortion law reform, standardising the age of consent, expunging historical homosexual convictions and starting the process of a treaty with First Nations Queenslanders.

None of these reforms were achieved overnight by top-down leadership. Leadership is important but community support is even more important. Whilst the Australian Labor Party has been a fighter for progressive causes, political parties are reflections of their communities and those who engage with them. Through grassroots community engagement, and with the support of a majority of members of parliament – from all political parties – I am certain that we can get this legislation across the line. No change is too difficult when a community is united.

Another Queensland issue that we care about is the practice of allowing what amounts to religious missionaries going into public schools to deliver sectarian Religious Instruction (RI) classes to some children while others have to be tasked with non-curricular activities. In some parts of the country, scripture lessons have been replaced with lessons on the historic role and cultural significance of various world religions. What is your position on these programs?

Faith and religion are an important part of many peoples’ lives. For some parents, the availability of Religious Instruction in school is convenient and valuable, while others vehemently disagree with its availability as a subject in a public school. On this matter, I believe school communities are best placed to make this decision rather than have a one-size-fits-all approach by the state, particularly given school communities reflect the broader community in which they exist.

As someone who was instrumental in seeing abortion decriminalised in Queensland, are you concerned that the election of the LNP to government could undo that good work?

Yes. The LNP have already confirmed that, should they win the next state election, they will review the Termination of Pregnancy Act, which has seen abortion managed as a health issue in Queensland rather than a criminal issue. This is clearly code for a full repeal or making access to health services so difficult that the laws become useless in terms of the actual health outcome.

The Liberal-National Party is controlled by “backroom bully boys”, as described by their leader Mrs Frecklington, whom they tried to roll only a month ago. These “backroom bully boys” are hardline conservatives who want Queensland laws to reflect their own personal religious values, whether that’s on abortion, voluntary assisted dying, gay marriage (or civil unions at a State level, which were repealed under Campbell Newman), and the list goes on. There have also been many media reports of the LNP bullying, intimidating and threatening disendorsement of those members of parliament who exercised their conscience and voted in favour of abortion law reform.

If this hardline conservative, “bully boy” culture were to be in control of the Queensland parliament, it would be tantamount to the Newman Government on steroids. Unfortunately, Mrs Frecklington has demonstrated that she’s only capable of standing up to them when it’s her job on the line and not when their behaviour affects the lives of everyday Queenslanders, particularly Queensland women.

According to recent reports, conservative religious forces -- dubbed ‘Christian soldiers’ in some articles -- are taking over the LNP. What do you think the future would hold for Queenslanders if the LNP were to win power this year?

What is occurring here in Queensland is an interesting example of entryism that is unique from the rest of the country. From the outside, it appears that a small group of highly organised and motivated ideologues are determined to change the LNP from the inside. This is all occurring without the knowledge of branch members and to the detriment of their parliamentary representatives.

Since the merging of the two parties, I have seen firsthand the diminishing identity and control of the Liberal Party within the LNP. Liberals within the LNP have been incrementally suffocated over the past 12 years and replaced by conservative cultural ideologues and economic troglodytes. I think Queenslanders understand that leadership instability, hardline actors and self-destructive tendencies do not make for a good government.

If the LNP were elected in October, I think policies like abortion reform will be threatened, VAD would be off the table completely and austerity measures will be implemented, including even more cuts to front-line public sector jobs than the 14,000 lost under Campbell Newman – a time when Mrs Frecklington was the Assistant Treasurer.

The Leader of the LNP, Mrs Frecklington, has also committed to considering establishing an ‘Office of Science Quality Assurance’ to challenge the science around climate change, water quality impacts on the Great Barrier Reef and the impacts of mining on flora, fauna and the water.

Few other politicians have come under such sustained attack by conservative religious forces for their progressive views. How difficult is it for progressive-minded politicians and community leaders, especially women, to be vocal in the public square?

It’s difficult – there’s no other way of putting it. However, as with anything in life, it all comes down to purpose. I wanted to dedicate some of my time in public life to give back to the community of South Brisbane – a community that had given so much to my family when they migrated to Australia. I wanted to contribute in some way to making our state better.

I’ve been an interested observer in politics for long enough to know that change is always difficult. More than 120 years ago, women were throwing themselves under galloping horses to convince men to give them the vote. Thirty years ago, the introduction of superannuation was met with incredible opposition and resistance from conservative commentators, industry and business. Twenty-six years ago, newspapers in Australia were fear-mongering that backyards would be handed back to First Nations people because of the Mabo decision. Even when you try and act in the best interest of the health of Queenslanders – as the Premier did in closing the borders – you get an avalanche of conservative critics piling on from the sidelines.

Criticism, fear, differences of opinion are not new. What has changed though is the media dynamic. The 24/7 news cycle is a very rich environment for misinformation, blatant lies and targeted, personal attack messages. The trick for me has been to remember that this is an environment with a lot of opinions but not a lot of knowledge.

What does ‘secularism’ mean to you? Has it been part of your political philosophy in any way?

I grew up in the Maronite Catholic faith, and this has been an important part of my cultural identity as a second-generation Lebanese migrant. However, I am philosophically committed to the separation of government from religion as a citizen and as a legislator. I absolutely support religion and the practice of faith within our community. However, as a diverse and multicultural community, we need to ensure that everyone is included when it comes to law-making and governing. That’s why it’s important to separate government from religion.

In some ways, secularism has been a part of my political philosophy, but I would say that my general view is that politics is an act of democratic pluralism, whereby the state is a faciliatory actor of multiple communities all aiming for better outcomes.

What are your views on the Morrison government’s Religious Discrimination Bill as currently drafted?

I am deeply worried that the laws as drafted can result in discriminatory practices. For example, a single mother, when dropping her child at child care, could be told she is a heathen for denying her child a father. It is similar to the Katter Australia Party Bill in the Queensland Parliament to allow gender discriminatory language because somewhere someone feels their way of life is being threatened because gender neutral language is being used in job advertisements. This isn’t an issue; it’s just more ammunition for a non-existent culture war.

Some religious groups argue that Labor lost the 2019 federal election because it ignored the concerns of religious voters, although the ABC’s Vote Compass suggested few people were concerned about religious issues. Do you have any views on this?

I think that there were several issues that influenced the outcome in 2019. But claiming that all religious Australians voted in a hegemonic manner is a bit simplistic and based more on anecdote than actual analysis and evidence. Ultimately, it came down to the fact that Labor failed to convince a majority of Australians to support our policy agenda.

Additionally, factors such as Clive Palmer’s $60 million plus spend on political advertising to support the Morrison government’s re-election and the proliferation of misinformation by coalition media contractors obviously had an enormous impact on the outcome of the election. 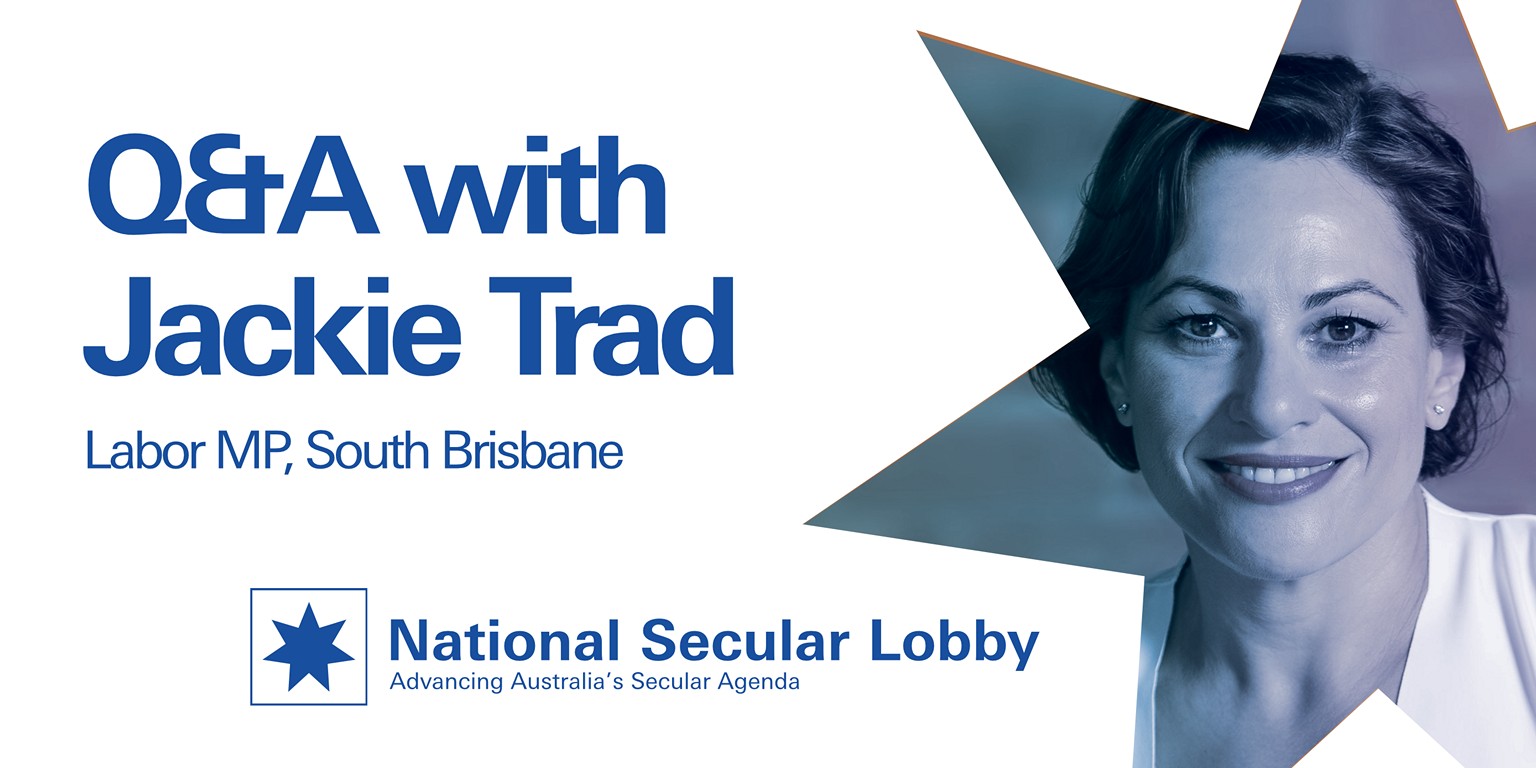