"Australia is not a secular country – it is a free country. This is a nation where you have the freedom to follow any belief system you choose. Secularism is just one. It has no greater claim than any other on our society. As US Senator Joe Lieberman said, the Constitution guarantees freedom of religion, not freedom from religion. I believe the same is true in this country."

Similarly, John Dickson, who was the Guest Speaker of the 28th Australian National Prayer Breakfast in the Great Hall of the federal parliament on 16 October 2017, said in a recent ABC Religion and Ethics program that secularism is:

"… an ideology that seeks to keep religion out of important aspects of the life of our community."

The notion is that the phrase 'freedom from religion' infers hostility to religion. I disagree.

Article 18 of the 1966 Universal Declaration of Human Rights, to which Australia is a signatory, along with 194 other member states of the UN, establishes the right to freedom from religion as well as freedom of religion. Article 18 says:

"Everyone shall have the right to freedom of thought, conscience, and religion. This right shall include freedom to have or adopt a religion or belief of his choice, and freedom, either individually or in community of others and in public, or private, to manifest his religion or belief in worship, observance, practice and teaching."

The use of the term 'freedom from religion' thus does not necessarily entail hostility towards religion. It refers to a pluralism of differing views. The legal and Rawlsian reasoning on this point is described in Meg Wallace's Freedom From Religion: Rethinking Article 18, 2015, published from her PhD thesis.

Within this pluralism the principle of free speech gives citizens the right to criticise each other's point of view.

It is surely true to say that in a cultural sense, Australia is secular. The curriculum of our schools is overwhelmingly secular; all legislation in our parliaments is secular even though at times it is religiously motivated; legislation conservative churches oppose such as gay marriage, decriminalisation of abortion, voluntary assisted dying and so on have passed, albeit against prolonged religious opposition; the media, business, sport, and the arts are very secular. Our hedonistic, materialistic, secular culture is promoted non-stop by advertising and media publicity.

However, this omnipresent, overwhelming culture tends to mask Australia's entrenched soft, theocratic characteristics which fly under the radar of most political commentary. Professor Anne Twomey described what I say are the roots of this phenomenon very well when she wrote in The Queen and Her Governors, 2006:

"Like a chameleon, the Crown is a unique and unusual creature within Australia's constitutional law. It takes great care to protect itself by blending into the background so carefully that its presence is barely perceptible."

The argument below extends this description but the conclusion is all mine.

I suggest what many religious ignore is that 'secular' in its legal, technical sense refers to a government positioned along the continuum of nation states from atheist at one extreme to theocratic at the other; a secular government is one that favours neither religion nor atheism. In principle, it sits impartially in the middle. It is not an ideology as John Dickson and Scott Morrison would have it. It describes the basic structure of democratic government.

Obviously, Australia is in no way an atheist state. But it is an exaggeration, in my view, to characterise our constitutional monarchy as secular.

Australia has many legal, symbolic, and financial aspects that result in a serious entanglement with religion, discussed below, making Australia an 'in-between state', tending towards theocracy.

Examples of this entanglement go to the fundamental structures of our government:

In conclusion, I suggest with all this symbolic, legal, and financial underpinning for religion, Australian government (like many other Western governments) is in effect a soft theocracy. We are closer to the characteristics of theocracy and nowhere near an atheist state. Western governments are running what amounts to a protection racket for religion forever mindful of the thought that the votes of the religious could determine the outcome of a close election.

Sure, we are not a nation where clerics sit in the parliament and rule (although ministers of religion are occasionally elected to parliaments (e.g. Reverend Fred Nile in the NSW Parliament, and in the UK 26 Anglican Bishops are appointed to the House of Lords), but we are a nation of conservative politicians where dreadful discrimination against transgender school students was avoided, thanks to five parliamentarians crossing the floor against the Religious Discrimination Bill.

With the Census revealing Christian affiliation slipping to 44 per cent, continuing its ongoing historical decline, with those not affiliated to a religion continuing their historical ascent to 39 per cent, it is time there was a parliamentary inquiry into government entanglement with religion. I suspect individual members of various religions would support such an inquiry as some really do take the notion of fairness seriously.

I'm not holding my breath. This is a supposedly secular government that does not think twice about whether it is appropriate to start the Parliamentary Year with a service in a church with government leaders at a pulpit giving religious sermons from the Bible, or to use the parliament for an annual Prayer Breakfast as if it was a church.

A disinterested Australian Republican Movement has been silent about separation of government and religion in an Australian republic. Sometime in the future Australia may simply become a Christian republic instead of a Christian constitutional monarchy irrespective of whether Christianity declines further in the Census.

The religious who believe the entanglement of religion and government is proper, normal and beyond question would be shocked at such a parliamentary inquiry into these matters. In their view, it would be yet more evidence of secularists – wolves in sheep's clothing - seeking a so-called neutral stance between religion and atheism that had as its true aim, not reasonable overdue reforms to untangle the entanglement between government and religion, but the elimination of religion from secular government according to an atheist agenda. Either the distinction between secular and atheist escapes them or they are beyond thinking that there could be a distinction.

But the question is what comes first - secular government that favours neither religion nor atheism - or the continuation of our soft theocracy that continues to lock in religious privilege, legally, symbolically, and most of all, financially, for the faithful - unfairly?

Max Wallace is the Secretary of the Secular Association of NSW. 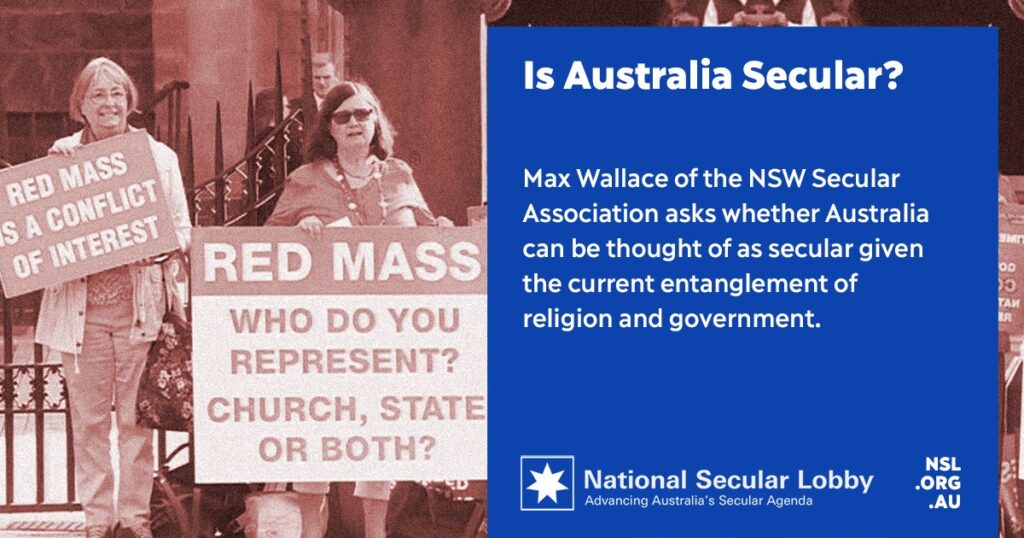