The evidence paints a pretty compelling picture that faith groups are enjoying preferential access to the decision makers as the Morrison government drafts its widely criticised 'religious freedom' laws.

In fact, the evidence has been leaking out in bits and pieces from religious groups themselves. Take, for example, the photos that were published in a Jewish news outlet in August showing the Prime Minister at a two-hour meeting with 21 religious leaders.

Then, last week, the head of the 'Christian legal think-tank' Freedom for Faith boasted that his team had been working closely with the Prime Minister and the Attorney-General behind closed doors, "giving feedback on the bill and offering some drafting solutions".

Meanwhile, secular and non-religious groups have been crying out to be heard.

We have reached out to both the Attorney-General's office and the Prime Minister's office on Monday for more information on exactly who has participated but have not yet received a response.

For our part, we wrote to the Prime Minister in early September to request a meeting on this issue. Again, we have not received a response.

As our ambassador Jane Caro says, it’s outrageous that secular and non-religious Australians are being ignored.

"These are the very people whose freedom is likely to be negatively affected if those with faith are given special and privileged protections under the law," says Jane.

At the NSL, we'd like to encourage everyone concerned about this important issue to contact their MPs and senators and voice their concerns about the lack of non-religious input into the Religious Discrimination Bill – and, indeed, their concerns about the Bill in general. As we know, this Bill does not merely prevent discrimination; it eats into the freedoms of all Australians by overriding other discrimination laws, and by granting unnecessary and divisive legal privileges to the religious.

Discrimination against people for their beliefs, religious or philosophical, should be protected -- but not like this.

For ideas on how you can take action, visit:
www.nationalsecularlobby.org/resources/taking-action/ 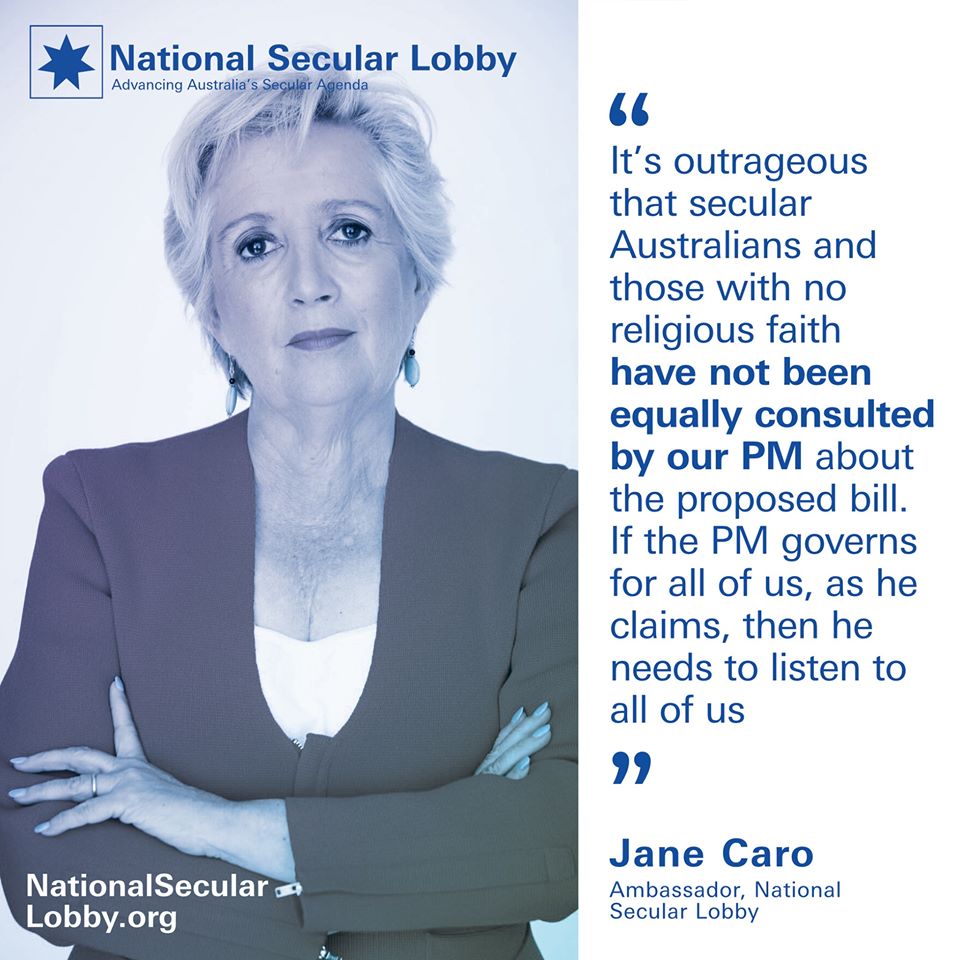