The following is extracted from the essay The Parable of the Amen Snorter and the Rotten Fish by James Ley, originally published at the Sydney Review of Books and reproduced in part here with permission of the author and publisher.

On 14 February 2008, Morrison stood in the federal House of Representatives as the newly elected Member for Cook to deliver his maiden speech, in which he said this:

"Australia is not a secular country — it is a free country. This is a nation where you have the freedom to follow any belief system you choose. Secularism is just one. It has no greater claim than any other on our society. As US Senator Joe Lieberman said, the Constitution guarantees freedom of religion, not freedom from religion. I believe the same is true in this country."

Morrison is Pentecostal, a version of evangelical Protestantism that has become increasingly influential in recent decades. In her book Beyond Belief: How Pentecostal Christianity is Taking Over the World, Elle Hardy notes that approximately a quarter of the world’s more than two billion Christians identify as Pentecostal, the denomination having made substantial inroads in Africa and South America, in particular. Around 30 per cent of the population of Brazil, once considered among the most staunchly Catholic of nations, now belong to a Pentecostal church. In stubbornly secular Australia, however, Pentecostalism remains a relatively minor phenomenon. According to the 2016 census, Morrison shares his religious identification with 1.1 per cent of the population, a proportion unchanged from 2011.

The political implications of Morrison’s uncommon religion have inevitably been the subject of a good deal of discussion and a certain amount of speculation. But the most telling thing about the lines cited above is also the most obvious: their incoherence. Morrison’s apparent inability to grasp the distinction between a personal belief system and an operative constitutional arrangement may simply be ignorance. To the best of my knowledge, no one has ever praised the current prime minister for his intellect, so the possibility that he does not understand a core principle of the Australian Constitution must remain open.

Yet the incoherence itself is revealing. There is a basic stance, or at least an attitude, discernible in the confusion of these lines. It is one of defensiveness. The factual inaccuracies and contradictions of Morrison’s declaration of principle all follow from his use of ‘secularism’ as a euphemism for godlessness. He is positioning himself as an embattled believer, defending his religious faith against a hostile ‘secular’ society, unaware that he is battling his own incomprehension, claiming a ‘freedom’ he already possesses.

Beyond the cheap hucksterism and general wackiness, Hardy identifies the essential features of Pentecostalism, one of which is the considerable extent to which the contemporary movement is politicised. It has come to be characterised by an ‘alarming shift towards an all-encompassing holy war, led by an army of believers striving to impose a dictatorship of the faithful … They want nothing short of a complete transformation of society.’

The theological form of this ambition is known as the ‘seven mountains’ doctrine, which maintains that believers must strive to take over the seven spheres of cultural influence (education, religion, family, business, government, arts and media), in order to defeat the rampant ‘secularism’ that is allegedly oppressing them.

The paradox — if that is not too elevated a term — is that Pentecostalism fuses this deeply reactionary agenda to the shonky self-validations of modern pop-psychology and the facile rationalisation of unchecked individualistic greed known as the ‘prosperity gospel’, which maintains that God rewards the faithful with material wealth and punishes the undeserving with poverty.

In essence, it provides a chintzy and very convenient justification for the worst excesses of neoliberalism and a specious doctrinal foundation for pursuing culture wars as core business. In doing so, it reflects neoliberalism’s distinctive combination of entitlement, arrogance, vindictiveness, paranoia and defensiveness. ‘Pentecostals feel simultanously triumphant about the fate of the world,’ observes Hardy, ‘but beseiged by the secular culture around them.’

Morrison’s conduct in office has been entirely consistent with those Pentecostal doctrines that would conflate virtue and selfishness; it has been entirely consistent with a world view that divides people into the deserving and the undeserving. But it has also been consistent with the ideology and culture of the party he leads. Ultimately, it is of little consequence whether or not Morrison is genuine in his religious beliefs. He probably is. But so what? It does not matter whether his religion determines his politics or his politics determines his religion; the signal is coming from the same source.

"The Parable of the Amen Snorter and the Rotten Fish" was originally published 9th May 2022 at the Sydney Review of Books. You can read the entire essay here. 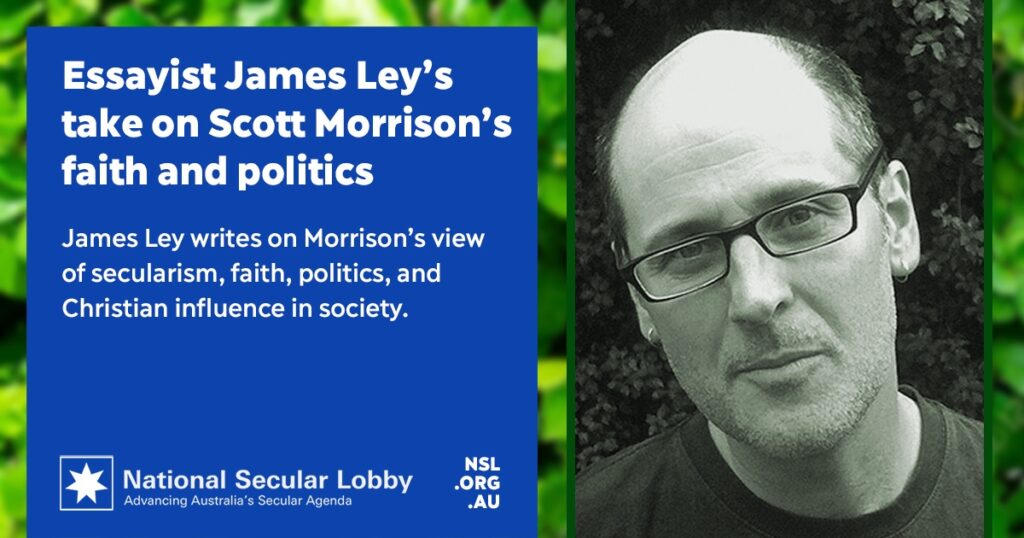