The National Secular Lobby is a member of the NSW VAD Alliance, headed up by Dying With Dignity NSW. You can sign the petition for NSW VAD laws here.

Here's some information on the issue and what's currently happening:

Why do we need VAD laws?

Too many people are dying bad deaths, as demonstrated by thousands of testimonies from terminally ill people, their families, and medical carers. Assisted dying laws return agency and control to people suffering from terminal illnesses.

Various parliamentary inquiries have found that assisted dying already happens in Australia, behind closed doors and without regulation, support, transparency or accountability. A VAD law brings these practices out into the open and provides protection for both patients and doctors.

What is the current state of VAD laws in Australia?

Victoria's voluntary assisted dying law has been in effect for more than three years. According to the latest (June 2021) report from Victoria's Voluntary Assisted Dying Review Board:

The Review Board confirms it has seen no evidence of abuse, with near universal compliance with the Act and no cases referred for investigation.

VAD has also been legally available in Western Australia since 1 July 2021. Tasmania, South Australia and Queensland have passed similar laws, with their schemes due to commence operation in 2022-23.

The people of NSW deserve to have the same choices as those in every other state.

What is being proposed in NSW?

The draft NSW Voluntary Assisted Dying law is based on the 'Australian model' of assisted dying that allows a terminally ill, mentally competent adult, who is suffering unbearably at the end stage of their illness, to seek medical assistance to hasten their death. This is the model already operating in Victoria and Western Australia.

What safeguards would be in place to protect against abuse?

Multiple safeguards ensure no-one is coerced or pressured into a premature death:

Cross-party parliamentary inquiries in Victoria and Western Australia have found "no evidence of institutional corrosion or the often cited ‘slippery slope’..."

What is the level of public support for assisted dying?

Multiple polls over the past 20 years have all shown the same thing: typically 70-80% support for a law allowing terminally ill people who are suffering intolerably to hasten their death if that is their choice. This figure includes a significant number of religious people.

There are some recent (July 2021) polling figures here.

An analysis of the 2019 Vote Compass data shows that every single electorate in NSW is in favour of VAD laws, with support levels in individual electorates ranging from 64 percent to 83 percent.

Wouldn't palliative care be able to deal with all these cases if it were better funded?

Palliative care is excellent but it cannot relieve all suffering. Palliative Care Australia estimates four percent of people are beyond its help even with the best care, and various allied groups and individuals have put the figure at between five and ten percent. This is not an either/or debate: palliative care and VAD work together.

Won't VAD laws result in (as some opponents put it) "extra deaths"?

No. People cannot take part in the VAD process unless they are already terminally ill.

What does the legalisation of VAD say about how we value life, and our attitude to suicide?

Conflating suicide and the seeking of VAD is misleading and dangerous. The difference was underlined by the Western Australian Parliamentary Committee investigating end-of-life choices:

"It is important not to conflate suicide with assisted dying. It is possible to distinguish temporary suicidal ideation from an enduring, considered and rational decision to end one’s life in the face of unbearable suffering."

What can NSW residents do to support Alex Greenwich's bill?

You can lend your support in the following ways: 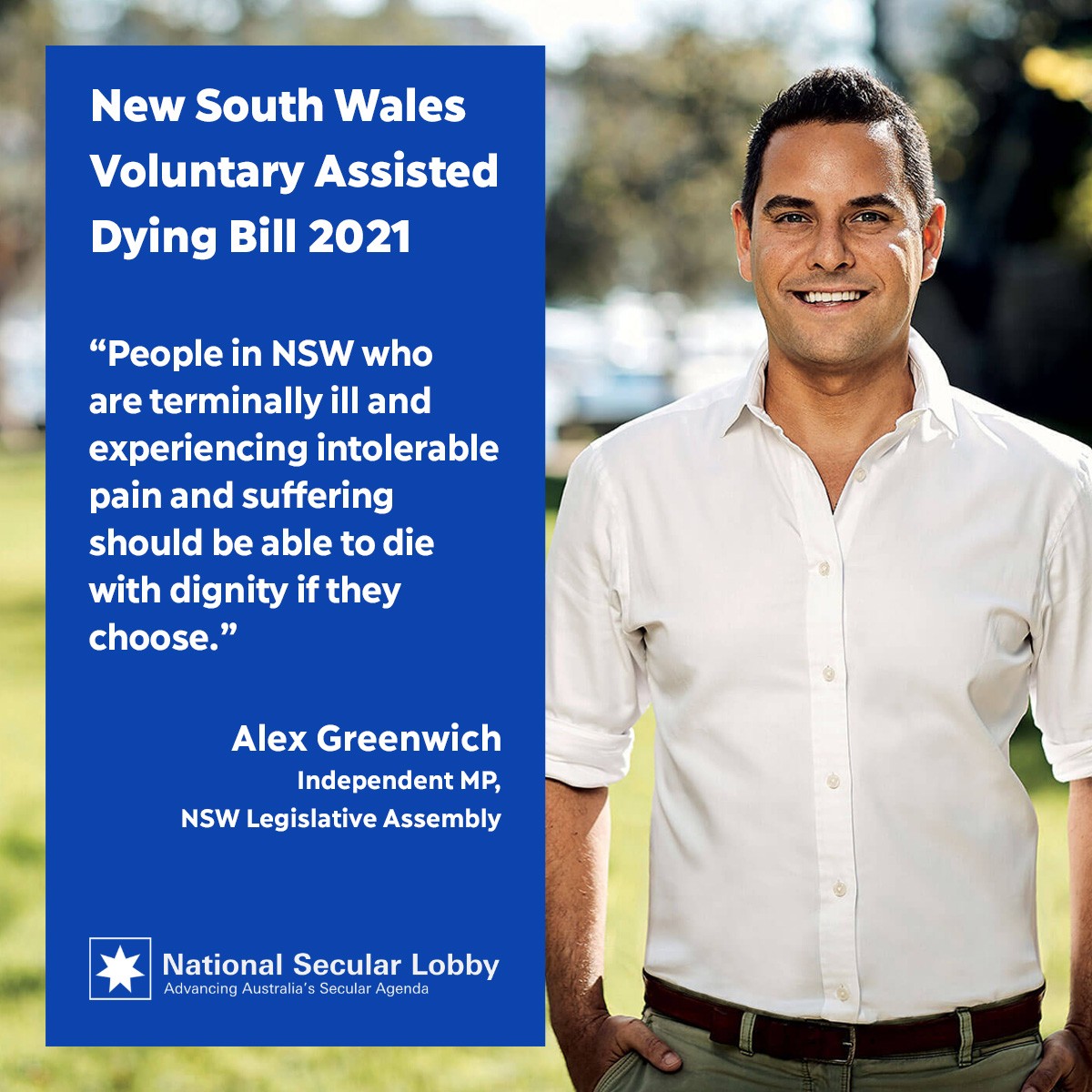