Today, on our Secular Spotlight blog, we’re pleased to have Hugo Walker, a teacher who was compelled to leave his role at a Christian school after coming out as gay, shares an extract from his submission to the Morrison government’s Religious Discrimination Bill.

I am a gay man who is also a Christian. I am a lucky survivor of gay conversion therapy (GCT), a horrendous set of practices founded in doctrines strongly adhered to by the most conservative elements of the church.

Our own Prime Minister has no problem with GCT even though it is repudiated by the medical profession as quackery at best and downright harmful at worst. I was just 22 years old when I went through GCT. It caused immense psychological, emotional and spiritual harm. Thirty years later, at age 52, I finally came out of the closet and now live as an out gay man. I am currently 58 years old.

But here’s the thing: churches that subscribe to the doctrines that gays are broken and that their sexual orientation is disordered will have carte blanche to preach such views and, based on their “sincerely held beliefs”, urge members of their congregations to undergo such programs as GCT.

After I came out, I lost many Christian friends. They told me that they can no longer be friends with me because I am, to quote their exact words, “...a pervert, an unrepentant sodomite, the Spawn of Satan and an abomination.”

Under the proposed law, they could call me such names...with legal impunity. This could include the situation of them being work colleagues. In order to stop them, I would have to take legal action in the Federal Court. I would have to prove to the court that any such anti-gay comment “would, or is likely to, harass, vilify, incite hatred or violence against another person”. In this case, the vilified person would be me.The burden of proof would also lie with me.

The new law assumes, as its starting point, that the person expressing such views...is merely giving voice to ideas which “may reasonably be regarded as being in accordance with the doctrines, tenets, beliefs or teachings of the religion.”

So here’s one of the biggest failures of this bill: how is the court to decide between me as plaintiff and my anti-gay accuser? The defendant could argue that they made their comments in good faith. They could say that they don’t want me to burn in the Lake of Fire and are warning me to repent and change. However, I, too, am a Christian. I read the same Bible. However, I understand the most important tenets of the Christian faith being about kindness, welcome and inclusion.

The planned Religious Discrimination law looks a lot like US style right-wing culture wars imported to Australia and imposed on our society. Fuelled by the passions and zeal of fundamentalist Christians, it is a deeply retrograde step for Australia to consider taking. It has the potential to cause immense harm – especially in my community, that of gay people of faith. 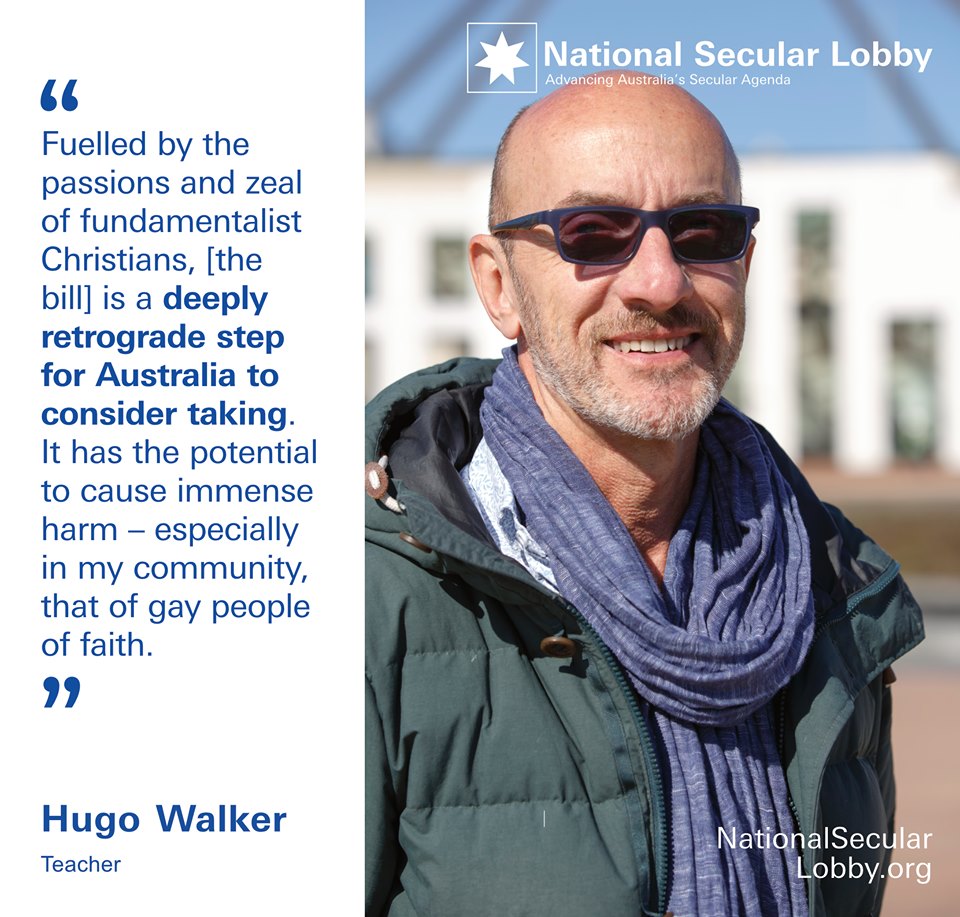