With NSW parliamentary discussion on an assisted dying bill delayed due to the COVID-19 situation in that state, we print here a letter from Father Peter MacLeod-Miller of St Matthews church in Albury, in support of the effort. A December 2020 poll showed support for VAD in NSW at 72%. Nationwide support for VAD amongst older Australians was recently reported at 86%.

Churches lobbying against assisted dying fail to have us singing from the same hymn sheet.

The recently published letter to state politicians from a small number of local predominantly male Faith leaders opposing the Voluntary Assisted Dying bill is certainly not the only letter in the "political in-tray" and in terms of the Christian electorate represents the minority view.

Many people of faith have good reasons to support the VAD bill and will do so.

It is an embarrassing truth that following similar celebrated "own goals" in Abortion and Marriage Equality legislation, religious leaders are so grateful to be asked to sign anything in the public sphere that they would sign a dry-cleaning docket if properly asked.

It is also an act of sabotage against the reputation of faith communities within contemporary Australia.

When Alex Greenwich proposed a bill to decriminalise abortion in 2019, it inspired bullying and coercion by conservative religious organizations against elected state politicians that was regrettable and showed an ugly side of church and state relations.

The proposed bill for voluntary assisted dying is conservatively drafted, modelled on similar successfully passed legislation from across the nation that respects the rights of faith based institutions to refuse to offer such services -- however the respect for those freedoms are clearly not reciprocated.

Those who attend the beds of the dying and terminally ill in our aged care facilities and nursing homes on the border and in regional Australia know the grim reality of human suffering that currently prolongs dying rather than living, and diminishes human dignity.

This legislation could actually offer relief and hope to those who are tormented and in pain, and the objections offered by conservative church leaders based on offering palliative care options fail to stack up with reality.

The Aged Care Royal Commission highlighted many deficiencies in the care of older and vulnerable people and while palliative care might look OK in black and white, the actual experience is in unnerving, abandoned technicolor.

The grim, almost unspoken, reality is that due to staffing deficiencies - with a few notable exceptions - people are not surrounded by loving support (unless fortunate to have a large, caring and able family) when palliated in place but are often alone attended by one overworked nurse or carer to as many as 100 residents, where individual pain management is a physical impossibility.

I have seen patients shaking and sweating in agony because pain management medication has been an hour late because of rosters and insufficient staffing. It is disturbing to see human beings tortured in a way that would be unthinkable for those committed to animal welfare which is why the proposed legislation presents as a blessing and answer to prayer in many Christian congregations.

Just as marriage equality legislation was supported by the majority of Christians around the country despite the furious lobbying, threats and financial investment by conservative leaders of religious institutions, I have no doubt that acknowledging the limited scope and application of the VAD bill it will also find wide support in the pews, if not the pulpits, across New South Wales.

While we might admire the resilience of religious perogative in expecting to be given the driver's seat and steering wheel when they continually run down people on the pavement, there must be a time when respect for the welfare of individuals rather than power of institutions is reflected in legislation.

Thanks to Alex Greenwich and the many members of our state parliament who are listening to their communities, braving the institutional comminations and are motivated by compassion, respect and human dignity.

The NSL is part of the NSW VAD Alliance.

Dying With Dignity NSW is currently running a petition asking NSW parliament to work together to pass VAD laws in 2021. 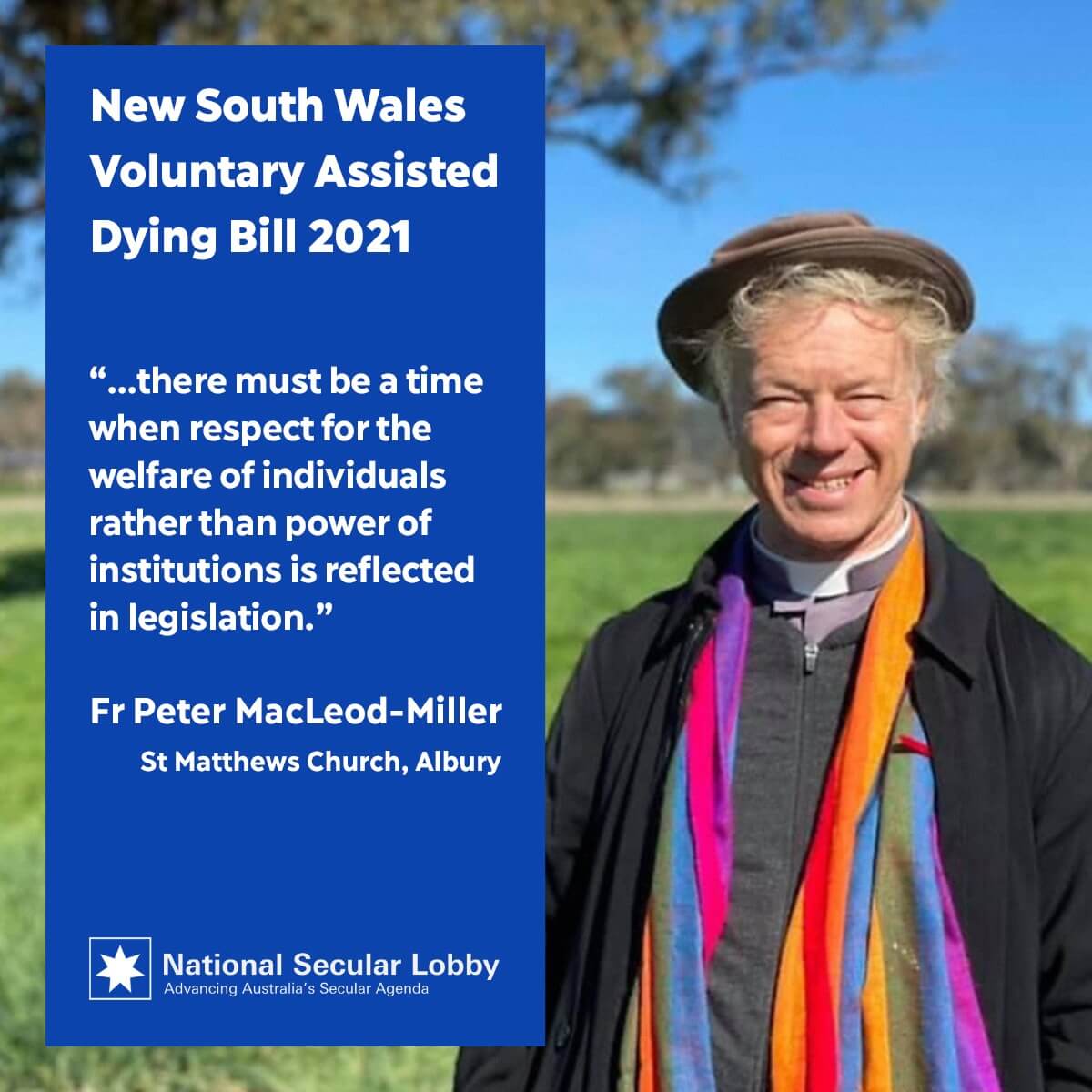