The news on Thursday morning that the Morrison government's flawed and divisive Religious Discrimination Bill had passed the lower house overnight was not a great start to the day!

But it became obvious as the day wore on that this progress was gained at a cost.

During that marathon session of parliament, Liberal MPs Bridget Archer, Trent Zimmerman, Fiona Martin, Dave Sharma and Katie Allen crossed the floor to join Labor, the Greens, and crossbench members Andrew Wilkie, Helen Haines and Zali Steggall in voting successfully for Rebekha Sharkie's amendment to protect LGBTI students from discrimination in religious schools (an amendment to the Sex Discrimination Act via a related bill in the RDB package).

The government fought against this amendment despite the fact that Scott Morrison promised back in 2018 that the law would be changed to remove the exemptions that allowed this discrimination.

Late morning, finding itself likely to face another defeat in the Senate (with Senator Andrew Bragg threatening to cross the floor in support of protecting students from discrimination), the government removed the bill from the senate program, shelving the bill indefinitely.

With only a few sitting days left for the Senate before the election, and a budget expected in that week, there'll be no opportunity for the bill to be reintroduced -- and the Government will not have the support of the Senate to progress the bill in the form that it wants.

The only downside to this outcome is that the long-promised changes to the Sex Discrimination Act, which would prevent discrimination against LGBTI students in religious schools, are still on hold.

Together, our efforts have stopped the Morrison government's flawed Religious Discrimination Bill becoming law, and we certainly hope it stays that way.

Article 18 of the International Covenant on Civil and Political Rights (of which Australia is a signatory) states that everyone shall have "the right to freedom of thought, conscience and religion" and the right "to manifest his religion or belief," but it also says that such freedoms may be limited in order to protect "the fundamental rights and freedoms of others."

In the spirit of this treaty, any federal legislation against religious discrimination must be a shield that protects, not a sword that undermines the basic protections of others, as these bills attempted to do.

To all of our supporters who have signed petitions, written to their MPs, or donated to support the cause, whether directly through the NSL, or via our joint campaign action with the #DontDivideUs alliance, or via other allied organisations, we want to say a massive thank you.

At this point, it's uncertain what the future of the Religious Discrimination Bill will be, but for now we can take heart that a victory has been won.

Yours in solidarity,
The National Secular Lobby 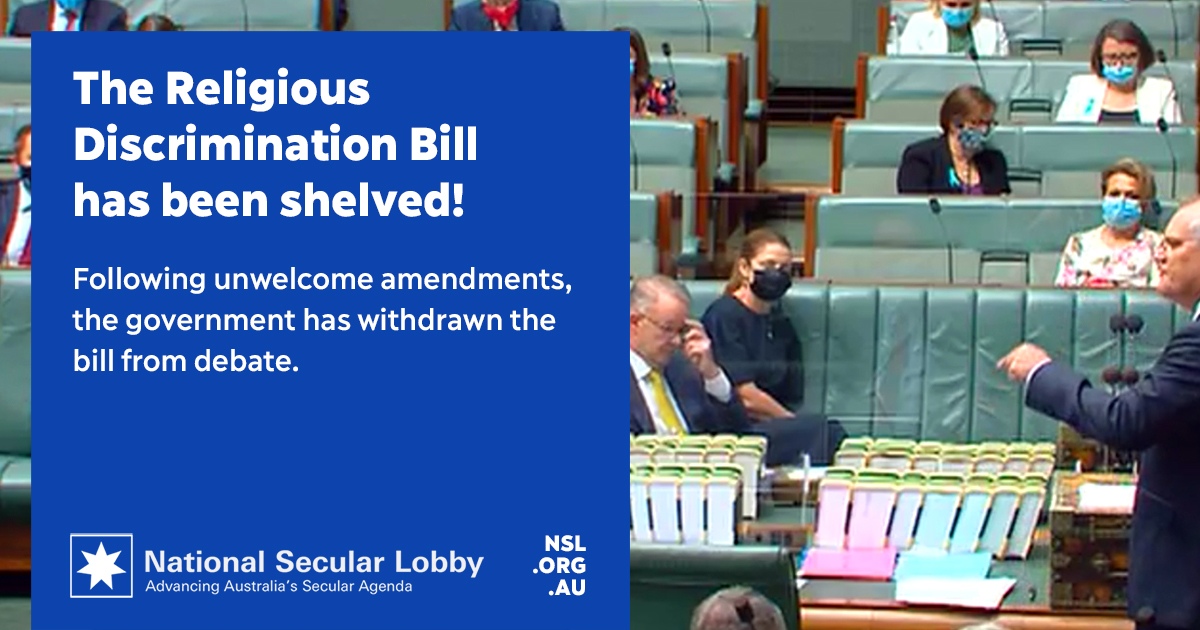