Our Belief: We believe that as a demonstration of love and compassion, those with a terminal or hopeless illness should have the option of a pain-free, peaceful and dignified death with legal voluntary assisted dying.

This statement really sums up both Christian and secular support for Voluntary Assisted Dying (VAD) as an end-of-life choice.

Our group, now known as Christians Supporting Choice for Voluntary Assisted Dying, was formed in February 2009, to give the vast majority of Christians who endorse VAD legislation a voice to our MPs.

The facts are clear. There is a vocal minority speaking up against this choice, but there is no way Catholic Bishops or groups such as the ACL (Australian Christian Lobby) can claim to represent the three out of four Christians who, according to reputable polling, do support VAD.

For those who oppose VAD, their choice is easy: they simply do not avail themselves of the process. How dare they seek to abuse their power and position by imposing their views and deny a VAD choice -- and this relief from futile suffering -- to other Christians and other Australians in an increasingly secular society.

Other facts are equally clear. The option of VAD gives great peace of mind to the patient seeking access and being approved for this assistance. Paradoxically, many live longer than those who do not seek to access VAD. There is no evidence of any ‘slippery slope’. VAD is not a choice between life and death but a choice between two ways of dying when death is inevitable. Our Christian group supports palliative care but we recognise, as do the palliative care organisations themselves, that even the best care can never provide the complete answer.

We deplore the emotive (and untrue) language so often used by Christians who oppose VAD -- the references to ‘killing’, ‘suicide’ and even ‘murder’! Such language should be restricted to the era of the Crusades and the burning of ‘heretics’ and we need to move on from this medieval past!

In contrast the terms used most often to describe a VAD death in Victoria during the two years of their legislation are ‘beautiful’, ‘peaceful’, ‘perfect’ and ‘serene’. We would challenge those Catholic Bishops to state how many deaths they have observed from cancer causing uncontrollable vomiting due to a blocked bowel, or a person choking on their own saliva as they die from Motor Neurone Disease, which could be described as ‘beautiful’!

Our Christian group was active in successfully lobbying MPs in Victoria, Western Australia, Tasmania, and South Australia. We also have a voice in countering some of the misleading claims against VAD made by some senior religious figures in the media. I have made numerous submissions and spoken at Government Inquires representing Christian support for VAD.

We ask our NSW MPs when considering this legislation to please put the patient who is approaching death in control and at the very centre of this discussion. Please be aware that generally the patient has already exhausted all possible treatments, even though many prescribed by the treating doctor are futile.

If any MP feels they cannot vote Yes in support, and thus not represent the overwhelming opinion of their electorates, then there is always the democratic option to abstain.

Ideally, MPs who are against VAD for any religious reasons would reach a similar conclusion to that of the former Governor of California, when signing off the California VAD legislation. Jerry Brown was a committed Catholic, who had previously trained as a Jesuit, and as Governor he actually had the right to veto this Bill. Instead, in a very rational and compassionate letter, he concluded –

“In the end, I was left to reflect on what I would want in the face of my own death. I do not know what I would do if I were dying in prolonged and excruciating pain. I am certain, however, that it would be a comfort to be able to consider the options afforded by this bill. And I wouldn’t deny that right to others."

Ian Wood is spokesperson and co-founder of Christians Supporting Choice for Voluntary Assisted Dying. They, like the National Secular Lobby, are a member of the NSW VAD Alliance, headed up by Dying With Dignity NSW.

NSW residents can sign the Dying With Dignity petition for NSW VAD laws and send a message to their representatives urging them to support the bill. 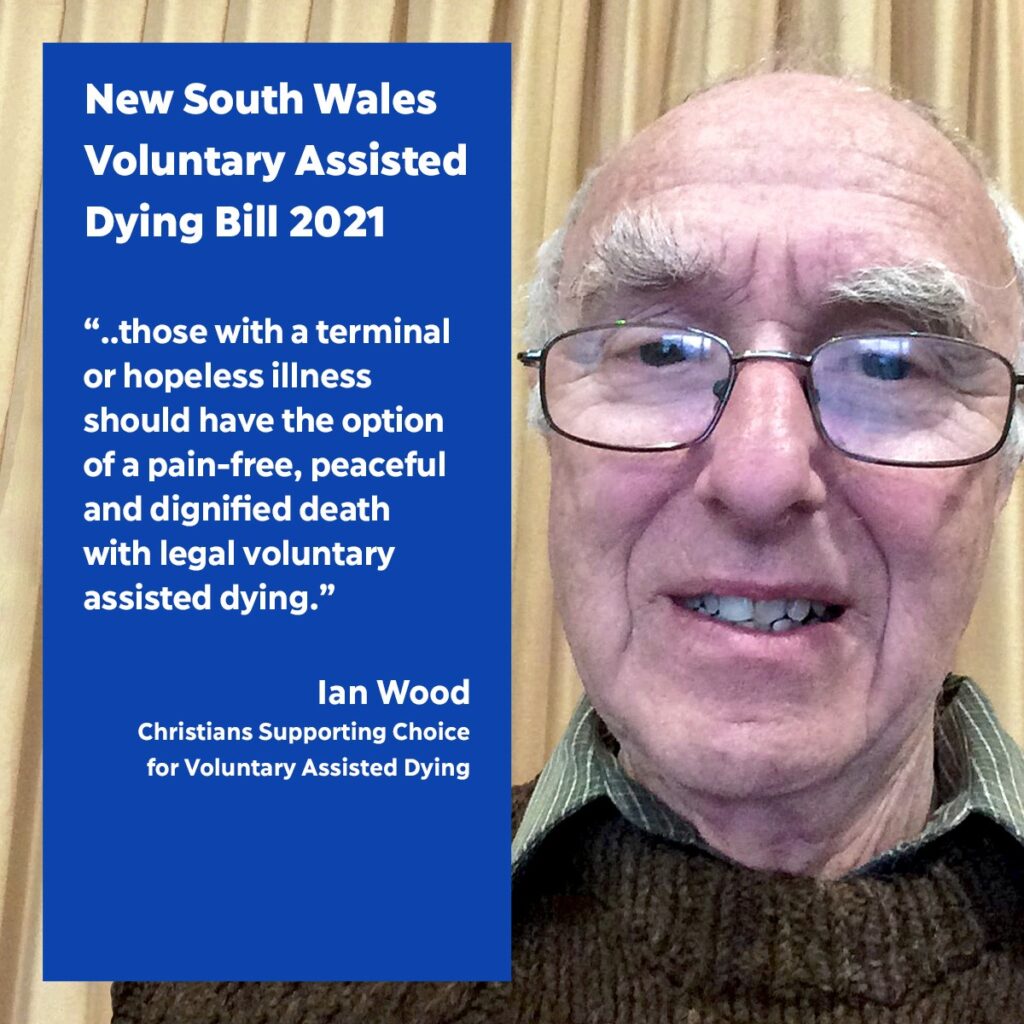