“It seems that we have a federal government prepared to enable Christian organisations to commandeer public school facilities, regardless of the views of these churches and whether they are contrary to the values of public education, the health, safety and wellbeing of all students, and the best interests of the community.

“No LGBTIQ student in a public school should have to come to terms with the fact that their school facilties are used by organisations that refer to homosexuality as a ‘detestable’ and ‘grievous’ sin hated by God, as ‘wickedness’, a ‘perversion’, ‘a disgrace’, an act of ‘impurity’.

“No child of LGBTIQ parents should have to accept that their school's facilities are used by churches such as the Hunter Bible Church, which worships at Lambton High School in Newcastle and likens children of same-sex partners to the 'Stolen Generation'.

“No female student should have to tolerate the fact that her school facilities are used by churches which promote the concept of 'headship' – that is, that a woman in marriage must place herself under her husband's authority.”

Darrin Morgan is spokesperson for Fairness in Religions in School (FIRIS), which is campaigning for the removal of Special Religious Education (SRE) in New South Wales’ public schools. We hope this 'BBQ Stopper' series focusing on the Morrison government's religious discrimination bill provides some useful talking points to share with friends and family. With the government seeking to expand religious privilege, talking religion and politics is bound to stop the barbie this summer! 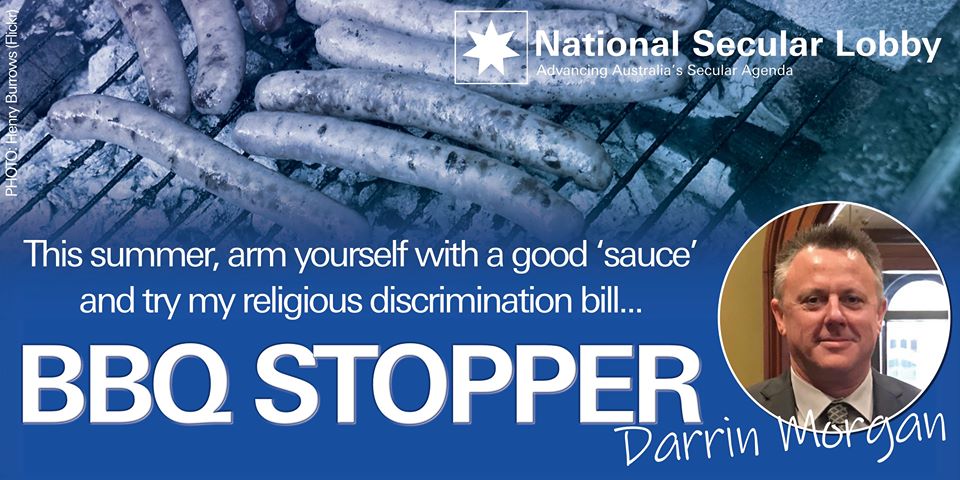