With parliamentary debate on the Religious Discrimination Bill resuming, now is the time to act on this unnecessary and divisive legislation.

The theory is that this clause will protect "moderately expressed statements of religious belief" (according to the Parliamentary Joint Committee on Human Rights) but as NSW Liberal senator Andrew Bragg said, "Strong evidence has been provided to the committee that the statement of belief is unworkable and undesirable."

The RDB has not even passed through parliament and already we can see its emboldening effects, with Citipointe Christian College last week coming under heavy fire for attempting to force parents to agree to fundamentalist views -- such as that being gay or trans is as “destructive to human relationships and society” as paedophilia -- as a condition of enrolment.

But despite the commitment of those pushing the bill, and of the religious leaders and lobby groups who support it, reaction to the tabled legislation has been decidedly mixed, with even some churches and faith-based organisations saying it goes too far. Moderate Liberals are threatening to cross the floor and vote against it.

Labor have offered conditional support, saying that they are not supportive of anything that removes existing discrimination protections from LGBTI and other groups.

There’s a constitutional problem here, too. The bill relies on the ‘external affairs power’, which allows Parliament to pass laws implementing treaty obligations, such as the International Covenant on Civil and Political Rights' provision on "the right to freedom of thought, conscience and religion."

But this bill isn't implementing that treaty; it’s breaking it by overriding existing human rights protections. The UN Special Rapporteur on Freedom of Religion or Belief has stated: "It would be contrary to ... freedom of religion or belief provisions to allow one set of rights to be undermined on the basis of claims made in defence of the right to freedom of religion."

While Australians do deserve a reasonable and consistent protection from discrimination on religious grounds, this Religious Discrimination Bill is not fit for that purpose.

It goes beyond any other piece of federal anti-discrimination legislation by removing superior state-level protections and by itself permitting discrimination.

And as the ALP's Graham Perrett has said, "Good legislation does not divide the community."

Please take a moment to send a short email to your MP and state senators asking them not to support this legislation, which will further divide our society along religious lines.

You can enter your postcode here to find your relevant MP and senators. 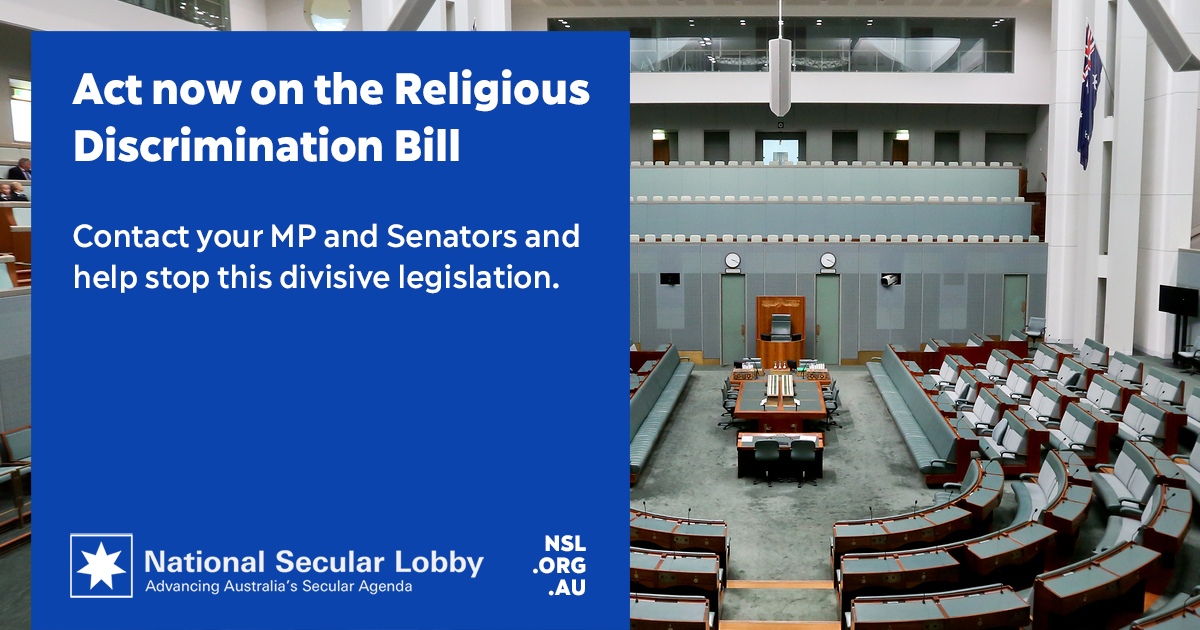